Dolphins raced to 47 for two in six overs.

Morne van Wyk led the Dolphins’ charge as he swept well and took on the Kolkata Knight Riders (KKR) bowling with consummate ease. Sunil Narine was in for some uncharacteristic hammering to all parts as runs began to flow for the South African outfit.

Vaughn van Jaarsveld and Morne van Wyk were left to pick up the pieces and the Afrikaner duo struck some crisp shots to get the scoreboard moving. Kuldeep Yadav came on and Kolkata Knight Riders (KKR) and Dolphins were struggling at 26 for two in five overs.

Earlier, Dolphins lost two early wickets in pursuit of a massive chase and were reeling after three overs with the score at 18 for two. Cameron Delport and Cody Chetty were both dismissed going  for the long hop and it was unlikely wicket-takers Yusuf Pathan and Andre Russell who came to the Kolkata Knight Riders (KKR) party.

Robin Uthappa and Manish Pandey‘s stunning exhibition of brute and finesse in the 18th match of the Champions League Twenty20 (CLT20) to launch Kolkata Knight Riders (KKR) to a formidable score of 187 for two. It was Dolphins who took early honours in the game through their pace duo Kyle Abbott and Robbie Frynlick but the bowlers wilted under the spectacular assault from the batting duo which resulted in KKR’s highest ever stand for all wickets. Uthappa and Pandey amassed 153 from just 90 deliveries. 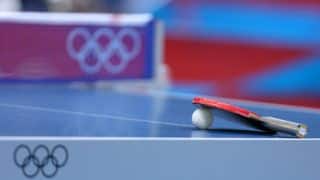 Asian Games 2014: India move to second round in Table Tennis