"On behalf of CAB, I thank our beloved and respected Chief Minister for her continuous support to cricket and other sports in the state." - Sourav Ganguly.

In a boost for the Cricket Association of Bengal, the state’s Chief Minister Mamata Banerjee has allotted 12 acres of land in Dumurjola Sports Complex for the upliftment of the sport.

Former India captain and CAB president Sourav Ganguly had written to the CM five months back, requesting for a plot of land to further develop cricketing facilities.

“On behalf of CAB, I thank our beloved and respected Chief Minister for her continuous support to cricket and other sports in the state. We also appreciate the setting up of floodlights in the Mohun Bagan and East Bengal grounds which will go a long way to help other sports also,” Ganguly said here today.

Meanwhile, the practice sessions of Royal Challengers Bangalore and Kolkata Knight Riders were cut short because of showers as rain threat loomed over this season’s first Indian Premier League fixture at the Eden Gardens tomorrow.

RCB hit the nets first and skipper Virat Kohli straightway took some throwdowns along with AB de Villiers, batting for some 30-odd minutes before rain interrupted the session. At the other end, Andre Russell and Chris Lynn were about to start their session but had to change their plan as groundsmen were pressed into action.

“By the time I came, they had covered the wicket so I could not see the wicket. We haven’t thought about the toss, will decide it tomorrow,” KKR captain Dinesh Karthik said at the pre-match conference. 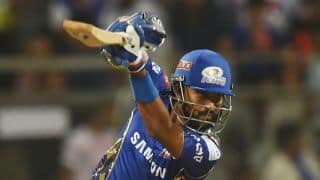 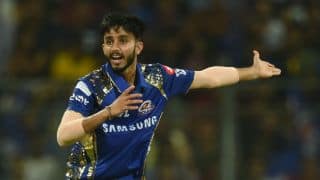