A senior BCCI executive has questioned the validity of the US trip for the current CEO and CFO.

The Board of Control for Cricket in India (BCCI) CEO Rahul Johri is set to travel to the US on the sidelines of the two T20I games between India and West Indies in Florida and giving him company will be CFO Santosh Rangnekar. While the official reason given is to discuss future tour programmes and also look into certain tax issues, board officials believe that these junkets need to stop.

Speaking to IANS, a senior board executive questioned not only the need for a 11-day trip for the CFO, but also asked if there was a specific reason why the CEO also asked for a leave during the trip. The executive said that the Committee of Administrators (CoA) has helped them in their endeavours.

“The present administrative controls in the BCCI are a joke. There is no valid reason for the CEO and the CFO to travel to the US. But they don’t seem to miss a single opportunity to travel with the help of a pliable CoA. All they need to do is present that they need to travel because they know there will be no application of mind in decision making.

“If you see the CFO’s travel, him travelling to the US for 11 days is a scandal. Who is he really visiting? Who approved his travel? Is there any transparency? Also, why has the CEO asked for a leave during the trip? The junkets must stop,” the executive pointed.

“Now he is travelling to the US while there doesn’t seem to be a proper reason for this travel. It is learnt that he isn’t travelling alone and that he is accompanied by other staff. We thought the ICC Annual Conference was already over,” the official pointed.

Echoing the sentiments, another official said: “If discussing future tours was the whole idea, why not meet the WICB officials in West Indies? The Indians will be in the Caribbean Islands from the third T20I onwards till the first week of September.”

It is believed that CoA co-member Diana Edulji wasn’t happy with the reason provided for the trip and didn’t approve the same while CoA chief Vinod Rai and Lt. Gen Ravindra Thodge gave their approval. 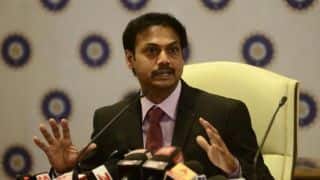