Rahul Dravid may be a strict disciplinarian but the victorious India U-19 team was given sufficient freedom during its month-long stay in New Zealand.

Rahul Dravid may be a strict disciplinarian but the victorious India U-19 team was given sufficient freedom during its month-long stay in New Zealand, revealed fielding coach Abhay Sharma.

India lifted a record fourth Under-19 World Cup after an eight-wicket rout of Australia in the final and stayed unbeaten in the tournament.

It may have looked a walk in the park for the the Indian team but there was meticulous planning behind the team’s success.

“There was no curfew on them. It was not like a military regime. We just wanted to make them aware what’s important in a friendly atmosphere,” the fielding coach told PTI.

“A lot of thought was given to minimise distractions and educate them to achieve their goals. The key was to stay humble always — be it in a loss or win. If you stay humble, you will become balanced. All these rubbed off on them and you saw the final product.”

Describing Dravid as superhuman, Sharma said: “I’ve been working with him for last three years and he’s given me a complete freehand. I’m really happy that he has chosen me.”

The preparation had begun about 14-16 months in advance as Sharma said he must have seen more than 35 boys before picking the final squad.

And once they got their squad, the focus was on a fortnight long preparatory camp in Alur, in the outskirts of Bengaluru so that the boys stayed away from distractions.

“Full marks to the preparation. We invested a lot of time before the tournament. Every session in batting, bowling and fielding was specifically designed keeping New Zealand conditions in mind.

“There was focus on second attempt catches, direct hit, and on how to get into a position before releasing quickly.

Sometime I used to show them so they would get charged up,” he said.

After the camp, there was a four-day break before India left for New Zealand two weeks in advance.

“There were high praises from the Australia and Bangladesh coach. They said that we have set the standard very high. It was like an eyeopener for them. That was the biggest compliment I had.

“Definitely the U-19 World Cup win will remain as one of the biggest moments in my career,” the former Railways coach signed off. 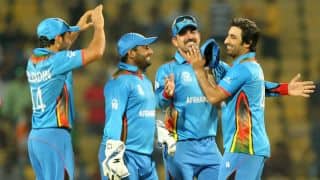