Mickey Arthur calls on beaten Pakistan to toughen up for Tests

Mickey Arthur calls on beaten Pakistan to toughen up for Tests

Mickey Arthur has demanded his players toughen up and seize key moments in Test matches after sloppy batting handed New Zealand an away series win over Pakistan.

Disgruntled coach Mickey Arthur demanded his players toughen up and seize key moments in Test matches after sloppy batting handed New Zealand an away series win over Pakistan for the first time in 49 years.

New Zealand pulled off a come-from-behind 123-run victory in the third and final Test in Abu Dhabi on Friday to end their long wait for a 2-1 series win.

Pakistan had dismissed the Kiwis for 153 in the first innings of the first Test in Abu Dhabi only to lose by a narrow four-run margin.

Pakistan bounced back by winning the second Test in Dubai by an innings and four runs but again failed to build a sizeable lead in the first innings of the third Test, a fact Arthur believes cost them the series.

“We missed opportunities and despite winning most of the sessions in the two losses we could not grab the moments to force a win,” Pakistan coach Arthur told AFP.

“It was our series to win but we ended up as the losing side and that’s highly disappointing.”

Arthur said Pakistan not gaining big leads in the first and third Tests was crucial.

“We have to have a look at our batting on the last day and that is tough in the UAE,” said Arthur.

Apart from the three occasions in Abu Dhabi — against Sri Lanka last year and twice against New Zealand in this series — they also collapsed at Birminghm, Hamilton and Melbourne — all in 2016.

“The quality is there as they are the best players in Pakistan who are working very very hard and I back them to the hilt,” said Arthur.

“But we need to be tougher in the crucial moments and that comes to us grabbing moments and being tough and we could not do this in this series which is disappointing.”

He added: “I will defend Asad and Azhar to the hilt. Asad is a wonderful player. I rate him very highly and I still feel his best days are ahead of him.”

Arthur now hopes Pakistan can do well in South Africa, a country where they have won only two Tests and were thrashed 3-0 on their last tour in 2013.

“I reckon we can go to South Africa and do well,” said Arthur.

“I believe and trust in these players, we have got some very talented cricketers and some good young players.

“We need to nail down our good positions which we are not doing and that’s the problem area.”

The first of three Tests starts in Centurion from December 26. 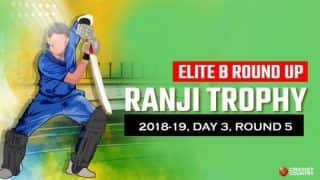 Ranji Trophy 2018-19, Group B, round 5: Himachal on the cusp of crushing win over Punjab