The Committee of Administrators (COA) has summoned the current set of BCCI office-bearers for a meeting in Hyderabad on April 5.

New Delhi: The Committee of Administrators (COA) has summoned the current set of BCCI office-bearers for a meeting in Hyderabad on April 5. The meeting will be held with senior vice-president CK Khanna, joint secretary Amitabh Chaudhary and treasurer Aniruddh Chaudhry, who are all expected to be in the cyber city, for the opening ceremony of the 10th edition of the Indian Premier League (IPL). It is learnt that both Vinod Rai and Vikram Limaye will be meeting the three office-bearers to ensure smooth conduct of the cash-rich league. They might discuss the April 9 Special General Meeting, where the N Srinivasan coterie will be trying to push the Tamil Nadu strongman’s name as BCCI representative at the ICC Meeting. Vinod Rai: BCCI don t need CoA approval to conduct SGM

Earlier, in a significant statement, the head of Committee of Administrators (COA) Vinod Rai on Thursday made it clear that the BCCI officials don t need their approval to convene a Special General Meeting (SGM). They [BCCI] don t need COA approval to call Special General Meeting (SGM) but yes they have to keep us in the loop. Also the decisions taken at SGM do not need any ratification of COA per se but if there is any deviation from SC diktat, the COA steps in, former CAG Rai answered a PTI query after IPL Governing Council meeting, reported PTI. 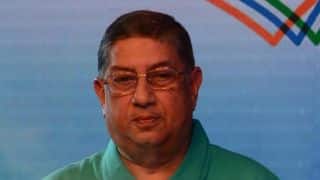 IPL 2017: Delhi Daredevils likely to miss out on services of Angelo Mathews