MPCA member Sanjeev Gupta had complained against Dravid citing a conflict in his role as the head of NCA along side being an employee of India Cements.

The much-debated ‘Conflict of Interest‘ of National Cricket Academy (NCA) head Rahul Dravid and the Board of Control for Cricket in India (BCCI) employee Mayank Parikh will be taken up by Ethics Officer D.K. Jain on Thursday as the duo depose before him.

Madhya Pradesh Cricket Association life member Sanjeev Gupta had complained against the former India skipper citing a conflict in his role as the head of NCA along side being an employee of India Cements.

Interestingly, Committee of Administrators (CoA) chief Vinod Rai has said that Dravid has resigned from his position at India Cements, but another CoA member confirmed that he has taken leave of absence.

It will be interesting to see how Jain looks at the whole episode as the BCCI has decided to also defend Dravid’s position with their own lawyers since he is now an employee of the BCCI as NCA head.

In Parikh’s case, it will be even more interesting as he is associated with multiple clubs who have voting rights in the Mumbai Cricket Association (MCA) and at the same time is an employee of the BCCI.

The same conditions had seen the late M.V. Sridhar needing to resign from his position as GM Cricket Operations.

Sridhar failing to disclose his involvement with clubs in Hyderabad saw him being asked to quit by the CoA as they felt that if he continued, it would mean flouting the order of the Supreme Court.

Ethics Officer Jain has been very particular when it comes to the recommendations of the Lodha Panel and the order of the SC and recently even asked former India skipper Sourav Ganguly to stop holding multiple positions.

In the mail accessed by IANS, Jain had given the Cricket Association of Bengal (CAB) president the benefit of doubt, but had also gone on to explain that he must not hold more than one position.

“I am inclined to give benefit of doubt to Mr. Ganguly that perhaps he may not have realised that his occupying the said three posts did involve “Conflict of Interest”. Accordingly, I direct the BCCI to ensure that Mr. Sourav Ganguly relinquishes his interests, which give rise to “Conflict of Interest” and does not continue to occupy more than one post as enumerated in Rule 38(4) of the Rules at any given point of time,” he wrote. 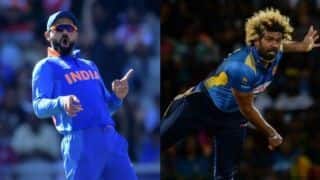