On Friday, during the first ODI between Australia and New Zealand at the Sydney Cricket Ground, the NZ players found a unique way of celebrating wickets. Coronavirus has impacted most sporting events by forcing events to happen behind close doors and postponing some of them.

On Friday, during the first ODI between Australia and New Zealand at the Sydney Cricket Ground, the NZ players found a unique way of celebrating wickets. They have snubbed the regular handshake and are opting for elbows or fist bumps.

Here is what transpired after Ish Sodhi sent Mitchell Marsh packing for 27 off 34 balls.

Elbows and fist bumps as New Zealand get the wicket of Marsh.

The Black Caps are currently in fine form as an ODI outfit, having clean swept India in a three-match series at home. Some clinical performances by the experienced pair of skipper Kane Williamson and Ross Taylor can lead the way with the bat in Australia. Opener Martin Guptill has found some form, having notched up fifties in each of his last two outings.

Meanwhile, hosts Australia opted to bat first after winning the toss. Captain Aaron Finch (60 off 75 balls) and David Warner (67 off 88 balls) got their side off to a dream start. Once the openers departed, Steve Smith got a start but could not continue as he perished for 14 off 17 balls.

D’Arcy Short (5) failed to get among the runs as Ish Sodhi picked three wickets. He finished with figures of three for 51 in eight overs.

At the time of filing the copy, Australia posted 258 for seven in 50 overs. 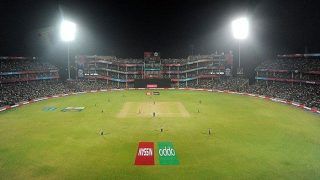