Walsh said India has good fast bowlers but they should be kept from injury.

Legendary West Indian fast bowler Courtney Walsh feels that India can solve the problem of young pacers breaking down soon after bursting into the scene if they maintain a higher level of fitness.

Walsh, who formed a lethal fast bowling pair for West Indies with Curtly Ambrose in the 1980s and 90s, said India has got some talented fast bowlers but the challenge was to keep them playing and save them from injury early in their career. “Couple of years ago, you had some young fast bowlers that burst on the scene and within a year after that, the injuries started creeping in,” Walsh told reporters at an event.

“[Umesh] Yadav, all the guys whom I saw and looked promising after a test series or two Test series, they started to get injured. That is where we have to maintain or manage that these guys get fit and strong so that they can go through the rigours of international cricket.”

Asked about the reason for these injuries, he said, “I personally feel they are not fully prepared for the work load. There is lot of cricket being played and as a fast bowler you have to work twice as hard as some of the batsmen would. I don’t think some of fast bowlers realise how important it is and by the time they realise the workload that is required, they have already picked up an injury or two. In today’s game, you have to be strong. That is the demand.”

He said that it was a similar problem in West Indies cricket also. “We have fast bowlers and main problem is we can’t keep them in the park. We have Tino Best, Jerome Taylor, Fidel Edwards, Shanon Gabriel, Ravi Rampaul, but the problem we have had with them is keeping them in the park,” Walsh said.

“Every one of them has got an injury over the last six to eight months. They play five or six test matches and then they get injured. Someone is rested for a year or six months or three months and that is the main problem we have. I won’t say we are lacking in fast bowlers. What we are lacking is keeping them all playing. Because everybody is getting injured, competitiveness dies down a little bit and they are not as sharp as they should be,” he said. 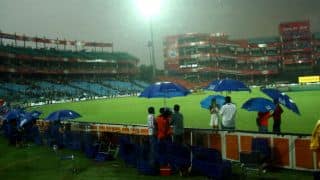