Barbados Tridents captain Kieron Pollard has received a ringing endorsement from head coach Desmond Haynes and all-rounder Carlos Brathwaite as the countdown to the start of the inaugural Caribbean Premier League (CPL) continues. 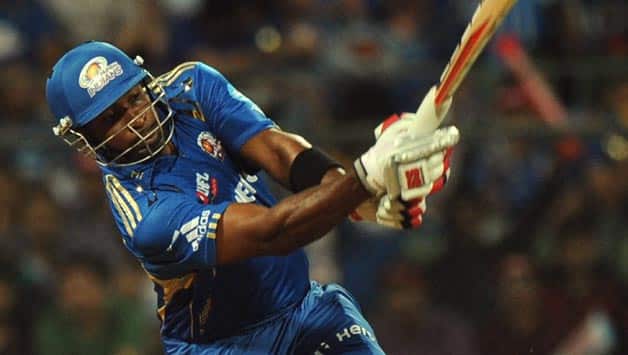 Desmond Haynes, the Barbados Tridents coach cited Kieron Pollard’s (above) performance for the Mumbai Indians as evidence of his utility as a T20 player © AFP (File Photo)

Barbados Tridents captain Kieron Pollard has received a ringing endorsement from head coach Desmond Haynes and all-rounder Carlos Brathwaite as the countdown to the start of the inaugural Caribbean Premier League (CPL) continues.

Haynes, a former West Indies opening batsman and Brathwaite have identified Pollard as critical to the success of the franchise in the CPL which is set to get underway in Barbados on July 30, reports CMC.

The 26-year-old, one of the elite players in the global Twenty20 format, will lead the Tridents into battle in the six-team tournament that runs until Aug 24.

“It is Twenty20 cricket and Pollard has been a very good servant for Mumbai Indians. He is a great T20 cricketer,” Haynes said.

“Pollard is a winner. If you look at what he has done for Mumbai Indians, I think it is something we should be proud of.”

Haynes’s sentiments were echoed by Brathwaite who pointed to Pollard’s impressive resume in international T20 as evidence of his quality.

Brathwaite, who played a One-Day International and a Twenty20 for the West Indies two years ago, said Pollard would definitely bring a winning mentality to the Tridents line-up.

“I’m looking forward to playing under his captaincy. I played with him a couple times in Trinidad for Queen’s Park and I always enjoyed his company. He was always very encouraging,” Brathwaite said.

“It’s always good to play with winners. They say winning is a habit but losing is a habit as well. We have someone leading us who has a proven track record of winning wherever he goes.”

Tridents will raise the curtain on the CPL when they face the Darren Sammy-led St Lucia Zouks in the opening game at the Kensington Oval Bridgetown, Barbados.