An unbeaten fourth wicket stand of 69 between Andre Russell and Danza Hyatt steered Jamaica Tallawahs to a seven-wicket win over Antigua Hawksbills in their Caribbean Premier T20 League (CPL) match at the Providence Stadium in Guyana. 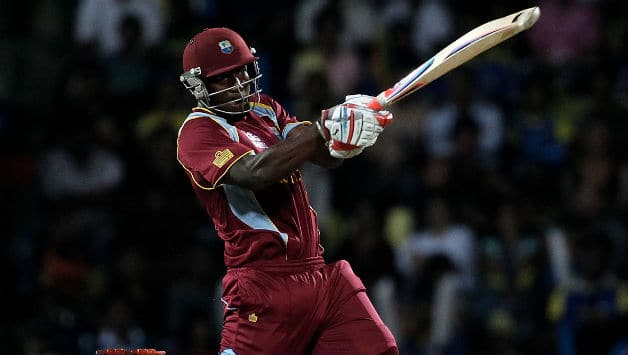 An unbeaten fourth wicket stand of 69 between Andre Russell and Danza Hyatt steered Jamaica Tallawahs to a seven-wicket win over Antigua Hawksbills in their Caribbean Premier T20 League (CPL) match at the Providence Stadium in Guyana.

Russell powered his way to 42 not out off 23 balls with four fours and three sixes while Hyatt made 25 not out, as the Tallawahs, needing 118 for victory reached 120 for three off 16 overs and five balls Sunday. Russell brought up victory with a six off the orthodox left arm spinner Dave Mohammed. He had already smashed two sixes in over – the 17th bowled by Justin Kemp.

Tallawahs had previously lost Ahmed Shehzad, caught by Kemp off Kemar Roach for one, lobbing to mid-on while attempting to beat mid-wicket. Nkrumah Bonner was bowled by Marlon Samuels as he tried to defend the off-spinner and left a gap and was bowled for 21. They also lost a subdued Chris Gayle caught and bowled by Rahkeem Cornwall for 11.

The Hawksbills, who won the toss and batted, struggled throughout their innings. Opener Kieran Powell was the only batsman to score freely but when he was the fifth wicket to fall Hawksbill were 88 for five in 14.3 overs.

He lost his opening partner Johnson Charles who cut powerfully to Ahmed Shezhad off Vernon Philander for nine. Ricky Ponting looked to get on top of the bowling but held out to Shehzad off the bowling of Chris Gayle for 19.

Muttiah Muralitharan struck two crucial blows in one over, sending back Marlon Samuels and Devon Thomas both leg before for eight and two runs, respectively, Hawlksbills losing wickets at 3-74 and 4-76.

Player of the match Vernon Philander then sent back Rahkeem Cornwall leg before for nine and induced Justin Kemp (19) into a false shot. Kemp’s attempt to launch a low full toss found an outside edge leaving Gayle to complete a simple catch.

Philander ended with three for 16, Muralitharan two for 18 and Gayle, two for 22. The victory was the first for the Tallawahs in the inaugural CPL while the Hawksbills endured their second straight loss.

Man of the match: Vernon Philander