Trinidad & Tobago Red Steel have won their third match in four days as they thrashed St Lucia Zouks at Queens Park Oval on Sunday. The Red Steel are unbeaten on their home turf. Chasing a modest score of 137, Evin Lewis smashed 77 in 45 balls while opener Kevin O’Brin smashed an unbeaten half century (55) and got there in 14.4 overs.

Languishing at the bottom of the points table, the Zouks won the toss and elected to bat. They were never quite in the game as the aggression  was missing and leggie Samuel Badree sending back the openers Andre Fletcher and Johnson Charles. The Zouks crawled and survived thanks to their skipper Darren Sammy’s 46 not out which helped them post a respectable total of 136.

In reply, the openers went ballistic hammering the bowlers all around the park. Irish batsman Kevin O’Brien was more of a spectator while Lewis once again looked destructive. Dropped catches and sloppy fielding only piled on the misery for the Zouks. Lewis got to his fifty in 24 balls eight fours and two sixes. He was eventually dismissed for 77. After completing his fifty, even O’Brien was dismissed stumped but it was off a no-ball. He finished off the game with a couple.

This is the fifth win in six matches for the Red Steel leading the table with 10 points while the Zouks are without a win in their four matches. 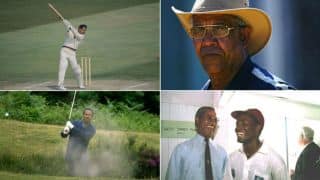