Mahmudullah has been called in as a replacement for all-rounder Imad Wasim, who was recalled by the PCB to undergo fitness test.

Barbados: Bangladesh batsman Mahmudullah, who has been left out of the Test side for the two-match series against Australia, has been roped in by Jamaica Tallawahs for the remainder of the Caribbean Premier League (CPL). The 31-year-old has been called in as a replacement for all-rounder Imad Wasim, who was recalled by the Pakistan Cricket Board (PCB) to undergo fitness test. While expressing disappointment over the loss of Wasim, who has appeared in five games for Tallawahs so far, coach Paul Nixon said Mahmudullah is a great replacement for the team. Bangladesh vs Australia: Coach defends decision to drop Mahmudullah, Mominul Haque

“We are gutted to be losing Imad Wasim but Mahmudullah is a great replacement. He is a proven match winner at international level and he is exactly the kind of player we need to claim back to back Hero CPL titles,” ESPNcricinfo quoted Nixon as saying. Mahmudullah, who notched up a century against New Zealand to help Bangladesh reach the Champions Trophy semi-finals in June, has 2344 runs from 123 innings in T20s at a strike rate of 114.28. He has also bagged 67 wickets with an economy rate of 7.04. Mahmudullah will join Tallawahs on August 23 before their CPL clash against St. Lucia Stars at Sabina Park on August 25.

Earlier, Bangladesh announced their 14-man squad for the two-Test series versus Australia, starting from August 27 at Dhaka. However, two surprise omissions from hosts squad were Mominul Haque and Mahmudullah. When asked about their exit, coach Chandika Hathurusinghe revealed that all the players have been picked keeping in mind their current form. 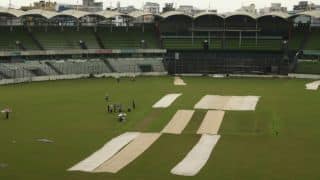