Tabraiz Shamsi admitted to a Level 2 breach of the code of conduct of the tournament.

You cannot question umpire s call. Even if you do, make sure you do not react. Even if you react, you don t do it on the umpire s face. Chinaman Tabraiz Shamsi did exactly that during the final of CPL 2017 against Trinbago Knight Riders. He was fined 50 per cent of his match fee as the officials described it as serious dissent .

Playing for St Kitts and Nevis Patriots, Shamsi appealed for an lbw in the 13th over. Shamsi thought his straighter one had batsman Javon Searles plumb. The umpire, however, turned down the decision.

Shamsi could not control his emotions and animatedly expressed his frustration, gesturing something the umpire did not approve of. The bowler later admitted to a Level 2 breach of the code of conduct of the tournament.

Shamsi soon got the better of Searles for a mere 2, ending with figures of 2 for 20. Despite his remarkable performance, his team lost the summit clash by 3 wickets. Knight Riders Kevon Cooper went all guns blazing and smashed 29 off 14 in the death overs to take his side to their second title. 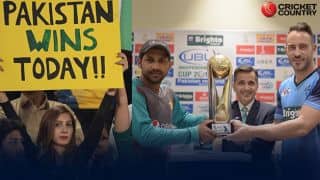