Trinbago Knight Riders are currently the table-toppers in CPL 2017.

The current table-toppers in Caribbean Premier League (CPL) 2017, Trinbago Knight Riders, are set to replace Mehedi Hasan with Ashley Nurse. Mehedi Hasan played a vital role for the franchise during his stay but will have to return back home due to national duty. Hasan is part of the 14-man squad for Bangladesh who are set to host Australia in a two-match Test series. The first Test will begin from August 27 at Dhaka. It is believed that Knight Riders’ skipper Dwayne Bravo was keen on getting Nurse on board for the reminder of the tournament.

According to Cricbuzz, speaking on acquiring Nurse’s services, Knight Riders coach Simon Katich replied, “Ashley (Nurse) gives us another spin option. He has been playing some league cricket in England, so he comes fresh to us from there. Dwayne Bravo was very keen to get him into the squad given that we have still got some big games coming up against St Kitts & Nevis Patriots, Jamaica Tallawahs and Barbados Tridents. He will have a big role to play giving us another spin option.”

Nurse, who has played 18 ODIs and 4 T20Is for West Indies, will be available for selection in Knight Riders’ next game versus St Kitts and Nevis Patriots on Wednesday (August 23). 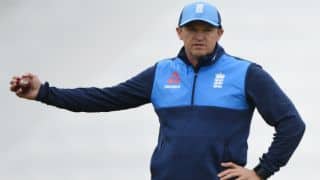