St Kitts and Nevis Patriots chased down 193 with one ball to spare in a thrilling Eliminator at Providence.

A stroke-filled century from New Zealand import Glenn Phillips was not enough to take Jamaica Tallawahs into the final of the 2018 Caribbean Premier League (CPL) final, as St Kitts & Nevis Patriots chased down 193 with one ball to spare in a thrilling Eliminator.

Phillips 103 from 63 balls had lifted Tallawahs to 191/5, the highest T20 score at Providence. However, his compatriot Anton Devcich scythed 50 off 23 balls to keep Patriots in the chase, before Australian allrounder Ben Cutting once more showcased his nerveless batting skills by hitting 17 of 10 balls, including the winning six off the penultimate ball of the night.

Phillips s second T20 hundred featured nine fours and six sixes and proved over 50% of Tallawahs score. With Johnson Charles falling for 3 in the third over, bowled by Cutting, and then Ross Taylor getting to 33 before also being dismissed by Citing, the innings needed momentum at 79/2 in 10.4 overs. Phillips then teed off to help Tallawahs add 112 in the last 56 balls of their innings, with some support from South African David Miller who hit 19 not out off 13 balls.

Patriots chase stumbled from the get-go. Devon Thomas threatened damage with 13 from six balls, but his dismissal saw Patriots captain Chris Gayle stumbled to 26 off 30 balls and Rassie van der Dussen make 20 from 22 balls. New Zealand leg spinner Ish Sodhi dismissed both Gayle and van der Dussen in the 10th over, which saw Patriots fall to 62/3. With the asking rate escalating, Devcich clubbed five fours and a couple of sixes to keep the chase going, and with clutch cameos from Fabien Allen (23 off 10) and Brandon King (21 off eight) the game refused to die.

When Devcich was sixth out at 158 in the 17th over, Patriots needed 34 runs from 20 balls. Evin Lewis, batting at No , fell in the 19th over to set Patriots a target of 15 from six balls from Rovman Powell. Carlos Braithwaite slugged a six before he was stunningly caught in the deep by Andre Russell, only for Powell to concede four wides to bring the asking down to five runs off two balls. Cutting s second six put Patriots into Qualifer 2 versus Trinbago Knight Riders. 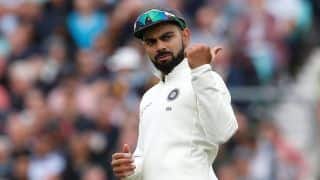