A rain interval reduced Patriots’ initial target of 207 to 118 off 11 which was achived with 5 balls to spare.

It took a special effort from Chris Gayle and Rassie van der Dussen and some assistance from the rain, but St. Kitts and Nevis Patriots were able to book themselves a place in the Playoffs of the 2018 Caribbean Premier League with a seven-wicket DLS win over Jamaica Tallawahs on Sunday. A rain interval reduced Patriots’ initial target of 207 to 118 off 11 courtesy an explosive start at the top and they held their own to successful complete the run-chase at the end.

der Dussen remained unbeaten on 45 off 24 and it was his breezy partnership of 47 off 17 balls with Mahmudullah that helped Patriots race past the target with five balls to spare. That said, der Dussen’s innings was almost a follow-up act to Gayle’s explosive 24-ball 41. He set the ton from the very first over of the chase, securing five boundaries off fellow West Indian teammate Krishmar Santokie. A first-ball duck for Evin Lewis, his opening partner meant that Gayle had to continue his impressive run and look for a steady partnership, which he was able to forge with der Dussen.

Having taken the Patriots to 65/1, rain intervened, and the revised target was set to 118 off 11. Tallawahs sniffed an opening, and Zampa removed Gayle – a ball after he had hit him for a six – and Ben Cutting in back-to-back deliveries. With Gayle gone, the onus was on der Dussen, and he was able to find a reliable ally in Bangladesh allrounder Mahmudullah.

With 43 needed off three, Tallawahs handed the ball to Oshane Thomas, who had scalped the wicket of Lewis. And that is where the game turned on its head. 25 came off that over from Thomas, with der Dussen walloping two sixes and his partner carting the fast bowler for two fours and a six of his own. The equation came down to 22 off 13, and it was never a threat from that point onward.

The chances of Patriots securing a win seemed thin when Tallawahs were batting. Led by Rovman Powell’s 40-ball 84 and another perky innings from David Miller got them to 206/6. Alzarri Joseph endured yet another forgettable evening conceding 51 off four, just a day after he was taken for five consecutive sixes in an over by Dwayne Bravo. Opener Glenn Philips once again got Patriots off the block, scoring 40 off 29 before departing. From 81/3 in the 11th over, Miller and Powell combined for 79 off 40.

Colin de Grandhomme and Steven Taylor then took the total beyond 200 in the final over, but their efforts went in vain because of the rain. 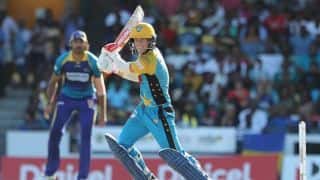