To finish second, Warriors needed to chase down 155 in 15.3 overs which they overhauled in 14.1 overs, finishing at 158/4. Rutherford was in some mood as he clattered six sixes and a four in his whirlwind 13-ball 45 not out to hasten the chase. Warriors beat Trinbago by six wickets with 5.5 overs to spare.

After 10 overs, Warriors were 86/2 and lost Jason Mohammed (5) at the start of the 11th over. Rutherford then clubbed three straight sixes off the first three balls he faced to put, shifting to the top gear in a blink. Hetmyer, who was batting on 41 off 22 took cue and blasted a four two consecutive sixes in the following over, bowled by Anderson Phillip.

Trinbago captain Dwayne Bravo came in to bowl next but he wasn’t spared either as Rutherford punished him with more three sixes to his name. Legpsinner Fawad Ahemd was pressed into action next and he immediately struck with the scalp of Hetmyer on 59. But by then Warriors needed just seven which they achieved in style.

That Trinbago were able to post a decent total was thanks to a late blitz from Kevon Cooper as he smashed three sixes and as many fours in his 14-ball 30 after their top order was wiped out inside the Powerplay.

Colin Munro scored 6, Coling Ingram 4 and Brendon McCullum was run out on 9 as Trinbago found themselves reeling at 23/3. Denesh Ramdin (32) and Darren Bravo (42*) stemmed the rot with a 54-run partnership for the fourth wicket. They were progressing towards a below-par total when Cooper struck Rutherford over covers for a flat six and followed that with a four in the 18th over. Sohail Tanvir, who had 19 runs for a wicket from his first three overs was taken apart in the penultimate over by Cooper for two sixes and a four before holing out to Hetmyer. Trinbago eventually finished at 154/7.

The two teams will meet again in the Qualifier 1 on September 11 with Trinbago finishing the league stage at the top. Jamaica Tallawahs and St Kitts and Nevis Patriots will clash in the Eliminator on September 12. 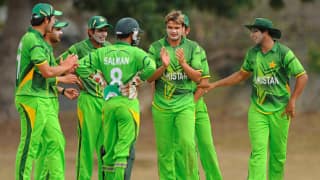