Shamsi will replace Tom Cooper who is returning to Australia for the start of their domestic season.

South African spinner Tabraiz Shamsi has been signed as the replacement for Tom Cooper in the St Kitts & Nevis Patriots squad for the remainder of the 2018 Caribbean Premier League (CPL). Cooper has returned to Australia to prepare for the domestic season.

Shamsi is back with Patriots whom he played for across the last three seasons, having taken 11 wickets at 20.27 in the 2017 edition. Patriots currently sit at fourth place on the CPL points table, and are hoping to make the play-offs. 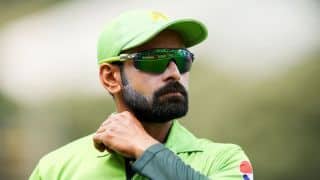