St Kitts and Nevis Patriots chased down 242 in a high-scoring encounter against Jamaica Tallawahs in a CPL match.

Records tumbled at the Warner Park as St Kitts and Nevis Patriots chased down 242 in a high-scoring encounter against Jamaica Tallawahs in a Caribbean Premier League match for the second highest successful chase in T20 history on Tuesday.

Openers Devon Thomas (71) and Evin Lewis (53) led a flying start in a whirlwind stand of 85 runs in 5.3 overs for Patriots in the chase. Laurie Evans and Fabian Allen extended the superb start before Tallawahs’ Oshane Thomas (4/53) took four wickets in seven deliveries including three in an over triggering a mini-collapse.

Allen and Shamarh Brooks added 50 runs for the sixth wicket to put them back on track. Allen finished the chase with a six and two fours off consecutive Andre Russell deliveries as Patriots won their first match of the season with four wickets and seven deliveries to spare.

Earlier, Chris Gayle smashed a record-extending 22nd T20 century to help Tallawahs to the highest score in CPL history that stood for a couple of hours before Patriots broke it.

Gayle belted seven fours and smoked 10 sixes in a 62-ball 116 as Tallawahs posted 241/4 after being put in to bat. After losing his opening partner Glenn Phillips (8) cheaply, Gayle stitched a record-breaking 162 run stand the highest for any wicket in CPL history.

Walton was equally devastating hitting three fours and eight sixes in his 36-ball 73 and was out late in the innings, in the 18th over while Gayle departed an over later.

However, the effort was to be topped by their opponents who combined with them to equal the record for the most sixes in a T20 37. 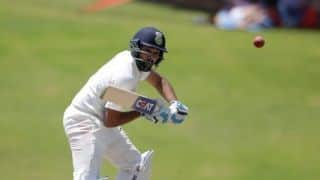