Craig Ervine continues to shine under pressure as his heroic ton guided a stuttering Zimbabwe to 344 for 8 against Sri Lanka at stumps of Day One of the only Test at Colombo.

Craig Ervine continued to shine under pressure as his record-breaking, heroic ton guided a stuttering Zimbabwe to 344 for 8 against Sri Lanka at stumps of Day One of the only Test at Colombo. On Friday, Zimbabwe won the toss and elected to bat first. However, they were off to a tumbling start, losing their top-order cheaply. The middle-order, led by Ervine, stepped up and helped the visitors stay in hunt for a decent total. Ervine (151) remained unbeaten at stumps with Donald Tiripano (24) and will search for some crucial runs on Day Two morning. Live cricket scorecard: Sri Lanka vs Zimbabwe, One-off Test

The Zimbabwe top order, one that boasts of Hamilton Masakadza, failed entirely in front of the Sri Lankan spin attack. Spin was introduced in the eighth over of the match by new skipper Dinesh Chandimal. The ploy worked as Rangana Herath found success in his very first over. Regis Chakabva failed to read the arm ball and went for a wrong shot that got him bowled for 12. Zimbabwe lost their first wicket within 10 overs of their innings.

Herath soon struck again, removing Masakadza, the pillar of Zimbabwe’s top-order. Trying to defend the delivery, Masakadza edged it to the Kusal Mendis at short leg and departed for 19, with Zimbabwe reduced to 38 for 2.

Zimbabwe’s problems increased even more when they lost Tarisai Musakanda the very next over. The two early wickets had put the team under a lot of pressure and the debutant fell prey to it. Lahiru Kumara bowled one outside off that kissed the outside edge and was comfortably taken by Niroshan Dickwella. The umpire was not convinced by the appeal, but Sri Lanka opted for a successful review to sent Musakanda back for 6.

Ervine and Sean Williams tried to bring in stability to the innings. However, the partnership lasted for only 32, the longest till the time, before Williams was dismissed by Dilruwan Perera for 22. Perera bowled a low full toss that Williams tried to sweep but ended up edging. With this wicket, Zimbabwe were reduced to 70 for 4 in the first session.

Ervine and Sikandar Raza then showed some skillful defense. They look fewer risks and opted to spend more time at the crease. The two managed to survive till lunch, with Ervine on 19 and Raza on 17.

The two paced up their batting a bit after lunch, looking comfortable to ensure at least one boundary in each over. Sri Lanka kept on producing tough chances. It was again Herath who got Sri Lanka their first wicket of the second session, in his second over after lunch. Raza, looking to defend, played for turn. The ball struck him on the pads and he was given out by the on-field umpire. Raza reviewed the decision, but replays confirmed that the ball had hit his pad first. He departed for 36, after a very crucial 84-run partnership with Ervine that stabilised Zimbabwe’s innings.

With Raza’s wicket, Herath equaled the number of Test scalps of Malcolm Marshall (376). He later went past the tally in the innings. It was also his 250th Test wicket at home.

Ervine, along with Peter Moor, brought up 150 for Zimbabwe. He looked quite confident, and soon brought up his fifty. At this point, Zimbabwe had a few small yet crucial partnerships. Their lower middle-order played very wisely, rotating strike and letting Ervine face more. Ervine, who seemed very comfortable at the crease, built up a 41-run partnership with Moor and a 65-run partnership with Malcolm waller, meanwhile completing his second Test ton and taking team’s score past 250.

However, another important partnership developed between Ervine and Tiripano. The two put up an unbeaten 62-run partnership at stumps, the highest for Zimbabwe for the ninth wicket in Sri Lanka. Ervine’s unbeaten 151 is his personal best as well as the highest individual score by any Zimbabwe cricketer against Sri Lanka (the previous best being Andy Flower’s 105*). As the team score went past 328, Zimbabwe put up the most runs in Sri Lanka. 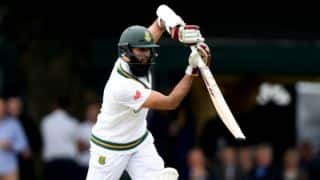 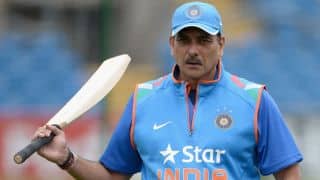 Ravi Shastri: Problem in Indian cricket made me apply for the Head Coach