The 24-year-old developed back pain during a training session and scans showed a disc injury following which he was sent home.

An injury to his lower back has ended fast bowler Craig Overton’s UAE tour as he left England Lions’ squad for rehabilitation.

Overton has represented England in three Tests and one ODI and was hoping to catch the attention of the national selectors through the A tour. The 24-year-old developed back pain during a training session and scans showed a disc injury following which he was sent home.

“Craig developed low back pain while bowling in training and scans subsequently revealed that he has sustained a disc injury. In collaboration with Somerset, the decision has been made for Craig to return to the UK for rehabilitation,” Lions medical team said.

There won’t be any replacement in the squad.

Overton made his Test debut during the Ashes series last December. He ended up injuring his rib after the third Test that ended his tour before a side strain again pushed the Somerset allrounder to the sidelines during the England’s domestic T20 competition. 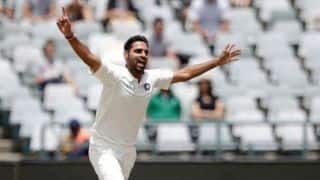