South African fast bowler Dale Steyn said his team were "staring down the barrel" before staging a fight back on the second day of the second and final Test against Australia at the Wanderers Stadium on Friday. 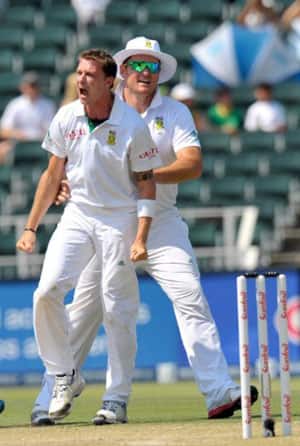 South African fast bowler Dale Steyn said his team were “staring down the barrel” before staging a fight back on the second day of the second and final Test against Australia at the Wanderers Stadium on Friday.

Australia took a 30-run first innings lead before being bowled out for 296. Only four balls were bowled at the start of South Africa’s second innings, with no runs scored, before bad light ended play.

Australia lost all their wickets for 122 runs after an opening partnership of 174 between Shane Watson and Phil Hughes.

Steyn took four for 64 and leg-spinner Imran Tahir ripped out the tail to take three for 55, his first wickets in Test cricket.

Watson and Hughes both scored 88. The openers scored 169 in an extended morning’s play, racing along at more than five runs an over, to put their side in a strong position to press for a series-levelling win.

But the run feast stopped when Hughes was caught at first slip by AB de Villiers off Vernon Philander in the fourth over after lunch.

Watson, Ricky Ponting and captain Michael Clarke followed Hughes to the dressing room as only 51 runs were scored for four wickets in 25 overs between lunch and tea.

“It didn’t go our way this morning. We had to reassess and after that the bowlers came out and did a great job,” said Steyn.

“Then we bowled beautifully and started to create more pressure. We were staring down the barrel but the guys stepped up.”

Hughes agreed with Steyn’s assessment. “I felt quite comfortable early but after lunch I thought they bowled outstanding lines.”

Hughes said Australia would take confidence from having a lead but said the Australian bowlers would have to follow the example set by South Africa in the afternoon.

“If you bowl in very tight areas it can be tough to score.”

Watson, who had scored 76 off 99 balls before lunch, laboured for another 41 balls to add 12 more runs before pulling Jacques Kallis to deep midwicket where Imran Tahir took a diving catch. It added to a history of Watson falling short of a century.

It was his 18th score of 50 or more but he has only converted two of those innings into centuries.

Ponting fell for his second successive duck when he shuffled across his stumps and was leg before to Dale Steyn in the next over – the third time in as many innings that he has fallen in the same way.

“When a new batsman comes in you want to make the first 15 or 20 balls count and with Ricky we’ve done that. He’s been on the receiving end of some good balls.”

Clarke did not look comfortable as he made 11 before edging Morkel to De Villiers at first slip.

It did not get much better for the tourists after tea, with Steyn dismissing the last two specialist batsmen, Usman Khawaja and Mike Hussey in successive overs.

Mitchell Johnson hit 38 not out to steer Australia into the lead.

Watson, showing no sign of the hamstring injury which kept him off the field for more than two hours on the first day, played some crunching drives before lunch, while Hughes was strong square of the wicket as he made 85 not out.

The host nation missed an opportunity to claim Hughes’ wicket when the batsman got a thin edge to a ball from Kallis which then went on to his pad and through to wicketkeeper Mark Boucher.

Hughes earlier gave a sharp chance to Hashim Amla at backward short leg off Morkel when he was on 30 and the total was 65. (AFP)