The organisers are also affected by Lodha recommendations which prompted the removal of BCCI bigwigs, including Anurag Thakur, who had approved sanctioning Rs 2 crore for holding the event.

Bengaluru: President of Cricket Association for Blind in India, G K Mahantesh, on Friday said they are struggling to raise the targetted amount of Rs 12 crore for holding the T20 World Cup for Blind owing to demonetisation. The tournament is scheduled to start from January 31. “Among various factors, demonetisation is one of the major factors for the organisers to achieve the target of raising Rs 12 crore for holding T20 World Cup for Blind, scheduled for January 31 start,” he told reporters here. Mahantesh further said, “Some companies including Coca Cola said they are affected by demonetisation. They said their sales are down and not in a position to give us money.”

Earlier, the organisers had planned to raise Rs 24.5 crore. The organisers are also affected by Lodha recommendations which prompted the removal of BCCI bigwigs, including Anurag Thakur, who had approved sanctioning Rs 2 crore for holding the event, Mahantesh said. “The BCCI had promised us Rs 2 crore or more, but due to the resignation of board members like Thakur, it got stuck. We don’t know who are the decision-makers. Nevertheless, we are planning to write an application to BCCI soon,” he said. On January 2, the Supreme Court had sacked Thakur and Ajay Shirke with immediate effect, holding that it was mandatory for BCCI to implement the Lodha Committee recommendations on administrative reforms in toto.

Asked what alternate measures the organisers would take to raise the remaining 40 per cent funds, Mahantesh said, “We will approach state governments for financial assistance. So far, the central and some state governments, have been helpful. The Telangana and Andhra Pradesh government are taking up the entire cost of conducting matches in Hyderabad.” Asked about Pakistan’s participation, Mahantesh said that they will land in Delhi, play matches there and play their remaining games only in Bengaluru.

“We would like to play against Pakistan. By then [when the tournament arrives] things [bilateral relations] should be good,” he said. Other teams in the fray are England, Australia, New Zealand, South Africa, Sri Lanka, Bangladesh and Nepal. Matches will be held in Delhi, Mumbai, Faridabad, Gujarat, Kochi, Bhubaneswar, Andhra Pradesh and Bengaluru. The legendary Rahul Dravid, who is currently the U-19 and India A coach, is the event’s brand ambassador. 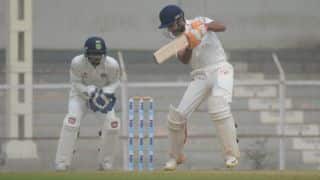