Australia is currently in England practicing for the ICC Champions Trophy 2017. They beat Sri Lanka by 2 wickets in their first warm-up match.

It has now been a long time that the disagreement between Cricket Australia (CA) and the Australia cricketers has been going on regarding the latter s pay dispute. With the revenue share to be stopped from the upcoming financial year Australia might witness a number of their mainstays go on a strike. However, CA CEO James Sutherland has revealed why the step has to be taken. Stating that the model of pay currently used is an old one, Sutherland elaborated on it revealing that this is hampering the distribution of fund in the grass-root level of cricket in Australia. READ: Steven Smith wants to put payment distractions behind ahead of Champions Trophy 2017

“The model was created in 1997, when players were poorly paid, but now our top male players are easily the most highly paid team sportspeople in Australia. The main issue in 2017 is the chronic under-funding of grassroots. This will require an investment over time of many hundreds of millions of dollars and we must start now. We believe we can achieve both a healthy increase in player payments and our grassroots funding objectives over the next few years by sensibly adapting the current player payments model,” Sutherland wrote in The Weekend Australian.

“The current model of player payments has done its job, but now risks starving other vital parts of the game. That must change,” he added.

Australia is currently in England practicing for the ICC Champions Trophy 2017. They beat Sri Lanka by 2 wickets in their first warm-up match. They will participate in the 50-over tournament with their full strength but cloud of uncertainty prevails over the availability of the cricketer for the Ashes, as there is indication of the cricketers boycotting matches to show protest over the pay-dispute issue. 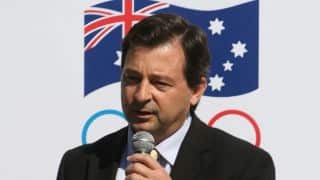 Ajit Agarkar: My job is to select players who can serve Mumbai for 5 to 10 years