Pietersen's axing has led T20 leagues to form a beeline for his signature.

Sacked England batting star Kevin Pietersen is reportedly in huge demand in Australia, with Cricket Australia (CA) willing to break their 100,000 pound-pay barrier to lure him to add even more glamour to Australia’s T20 format in the Big Bash League (BBL).

England selectors were anxious to get shot of their maverick batsman and have already reached a financial settlement to compensate him for the remaining eight months of his central contract.

However, the Mirror reports that the South Africa-born player is most wanted by the Australian cricket chiefs, who will get round the Big Bash pay barrier by boosting his salary package in return of an additional sum from Australian cricket”s central coffers to promote what is already proving to be a thriving competition.

The report mentioned that the idea was first proposed when Pietersen was in temporary exile 18 months ago, adding that the Melbourne Renegades had an agreement in principle with the batsman to take one of their two overseas slots before England confirmed his ”reintegration” for the 2012-13 tour of India.

Australian spin legend Shane Warne would be equally keen to persuade his former Hampshire colleague to hook up with city rivals Melbourne Stars. However, Pietersen had already given notice of his intentions to play in the Indian Premier League (IPL) this spring rather than regain first-class form in county cricket before England’s decision to move on without him, the report added. 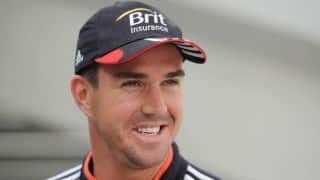