The caps on eBay were promoted as authentic, real baggy green cap.

Cricket Australia (CA) has said that its legal department would investigate the flood of replica Australian Test cricket caps on eBay that were being manufactured in India.

Australia’s prized Baggy Green Test caps, which can now be bid online at a starting price of 5.50 dollars, have been described as ‘authentic’ by their Indian producers, which have been an eBay member since September 2012.

According to the Sydney Morning Herald, a CA spokesman branded the Baggy Green as ‘iconic’ and warned that the organisation would not look favourably upon the items being sold on the website as they are vigilant about protecting CA’s intellectual property.

Stating that the matter has been referred to their legal department, the spokesman further said that CA regards the cap as an iconic symbol and protects it very closely, adding that the cap is one of the one of the most powerful symbols in not only Australian cricket, but also world cricket.

The spokesman also said that genuine Baggy Green caps sells for very high prices when they are auctioned, adding that in one case, one went for over 400,000 dollars because it was a Sir Donald Bradman cap.

CA, at the behest of players who represented the nation during the Mark Taylor and Steve Waugh captaincy eras, resisted the urge to produce replicas for commercial sale despite the promise of royalties, because they feared it would cheapen the significance of being presented with the cap.

The caps on eBay were promoted as ‘authentic, real baggy green cricket cap 2014 Test Ashes’ and an appeal to ‘be part of a proud tradition’ was accompanied by photographs of luminaries such as Bradman and Ricky Ponting, the report added. 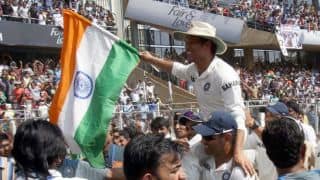