Nadal beat Dimitrov in the semi-final, while Federer beat Wawrinka to make it to the Australian Open 2017 final.

Spaniard Rafael Nadal beat Bulgarian Grigor Dimitrov in the semi-final of the Australian Open 2017. He will meet Roger Federer in the final, on Sunday. Many from the cricket fraternity have congratulated Nadal on his win in a match that went the distance. Nadal beat Dimitrov in five sets 6-3, 5-7, 7-6, 6-7, 6-4. Nadal and Federer have not met in a Grand Slam final since 2011. Federer overcame countryman Stanislas Wawrinka in the semi-final to make it to yet another Grand Slam final. Federer will be gunning for his 18th Grand Slam title, while a win in the final on Sunday will give Nadal his 15th Grand Slam title.

On Sunday, we will also see the Williams sisters Venus and Serena facing off against each other in the women s final. We never thought that we [Federer and I] had the chance to be again in a final, said Nadal after his semi-final clash, according to The Telegraph. Both of us I think worked very hard to be where we are. It s great that again we are in a moment like this and we going to have a chance again to enjoy. Now I going to go back to the locker room and say thanks to my team for the support, then just try to recover. First of all, I need to go to sleep. That s the first thing that is important for the recover. After that [I ll] try to do all the things the right way to be ready for Sunday.

The Federer vs Nadal final is going to be a cracker! Really winding back the clock with 2 legends of the game. @AustralianOpen Steve Smith (@stevesmith49) January 27, 2017

One of the most beautiful rivalries in sport #Fedal . Double Dhamaka this Sunday. pic.twitter.com/sFeD16PuSR

People are getting nostalgic over Yuvraj Dhoni Federer Nadal etc.

Dude, you had heard of none of them when Nehra-ji had arrived.

Nadal currently leads the head-to-head ties against Federer. Of the 34 matches these tow have played, Nadal has won 23 and Federer just 11. 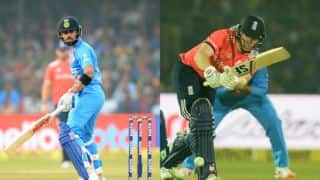