Tushar Arothe has claimed innocence a day after he was arrested and subsequently released on bail for allegedly betting on an IPL match.

Former Indian women’s cricket team coach Tushar Arothe on Wednesday claimed innocence a day after he was arrested and subsequently released on bail for allegedly betting on an IPL match.

“This (cricket) is my bread and butter. Whatever I am today is because of cricket and I will never do such type of activity. Life mei ek paisa idhar-udhar nahi kiya hai (I have never cheated),” Arothe told PTI.

The 52-year-old from Baroda was arrested on Monday before being given bail by the police, Vadodara Police Commissioner Anup Singh Gehlot said on Tuesday.

“Forget about doing it, I have never thought about it,” the former batsman, who represented Baroda in 114 first-class games.

Arothe and 18 others were arrested by the city Crime Branch for betting on the IPL match between Delhi Capitals and Kings XI Punjab played at Mohali, said Deputy Commissioner of Police Jaydeepsinh Jadeja of Vadodara Crime Branch.

“Arothe is a former coach of the Indian women’s cricket team. He was among the 19 persons held by our team last night for placing bets during the live telecast of an IPL match between Kings XI Punjab and Delhi Capitals,” said Jadeja.

Arothe took over the reins of the Indian women’s team in 2017 from Purnima Rao.

During Arothe’s tenure, the women’s team had made it to the finals of the 2017 World Cup.

He had resigned from the post in controversial circumstances. His son Rishi, a left-arm pacer, also plays for Baroda. 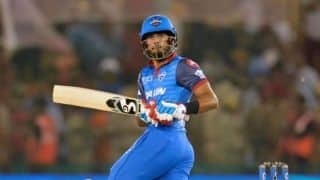