Chahar has taken his game to another level in the last couple of years and he has been quite phenomenal for CSK in the Powerplay overs.

Swing bowler Deepak Chahar heaped praise on Chennai Super Kings captain MS Dhoni about his resurgence in the 14th edition of the Indian Premier League. Known for guiding youngsters with his unmatched wisdom and street-smart attitude – former India captain has played an important role in shaping the careers of the likes of – Virat Kohli, Rohit Sharma, Ravindra Jadeja, Hardik Pandya, R Ashwin, Kuldeep Yadav, and Yuzvendra Chahal. Chahar is another name from that renowned assembly line who has picked the brains of none other than one of cricket’s most celebrated captains in the limited-overs format.

The 28-year-old Chahar who looks certain to tour Sri Lanka with India’s white-ball squad in the proposed series in July has credited CSK skipper Dhoni for helping him become a Powerplay specialist. “It was a long-cherished dream of mine to play under Mahi bhai. I have learnt a lot under his captaincy. I have taken my game to another level under his guidance. He has always backed me. He taught me how to take responsibility. There is no one in my team (CSK) who bowls three overs in the powerplay. I do that. That’s because of Mahi bhai. Bowling the first over for a team is not an easy job. With time, I have improved and learned how to control the flow of runs, especially in T20s,” Chahar told TimesofIndia.com.

Chahar has elevated his performances particularly in the last couple of editions of the cash-rich T20 league – IPL. He consistently bowled with the new ball for CSK and gave some notable performances in the powerplay overs. His took two four-wicket hauls against KKR and Punjab Kings helped CSK gain early control and knocked the fight off the opposition in his very opening spells.

“Mahi bhai has made me a powerplay bowler. He always says ‘you are my powerplay bowler’. He, most of the time, gives me first over of the match. I have been scolded by him a lot, but I know those talks and that guidance has benefitted me a lot as well and helped me grow as a bowler,” Chahar added.

In the seven matches of IPL 2021, Chahar picked 10 wickets and the majority of them came in the powerplay. 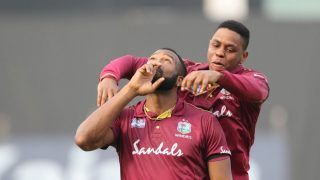