A group of international cricketers set a new record for the highest-ever match with a lung busting effort at the top of Kilimanjaro on Friday. The teams, including English bowling legend Ashley Giles and South African icon Makhaya Ntini, the country’s first black Test player, trekked to the roof of Africa before dawn and played ten overs each of a Twenty20 game before cloud stopped play.

The game was played at 5,730 metres (18,910 feet), in the flat crater just below Kilimanjaro’s 5,895-metre summit, an AFP correspondent said. The current record for the world’s highest game is 5,165 metres, played in the Himalayas at Everest base camp in Nepal in 2009.

“It was great fun, worth coming all this way even if I didn’t stay long in the crease,” said Steven Smith, 22, who was bowled out for a duck. “It was such hard work breathing and running at this altitude but something like this only happens once in a lifetime.”

The final score was a winning 82 for 5 for the ‘Gorillas’ team, led by England women’s vice-captain Heather Knight, against 64 for 9 for the ‘Rhinos’ team led by Ashley Giles. “It was tough running between the wickets but it was easy bowling Ashley Giles out! Fully worth coming all this way, with such an amazing feeling getting to the top, and — I hope — breaking a world record!” Knight told AFP. Top scores were 20 each by Heather Knight and Phil Walker, editor of the All Out Cricket magazine. The match — played on a plastic mat for the wicket over the ash and in thin, freezing air surrounded by vast blocks of ice — is expected to qualify as a new world record, as under Twenty20 rules a minimum of 5 overs per team constitutes a match.

Tanzanian mountain guide Mukuru Mugapablo, one of a handful of bewildered spectators, said he had seen nothing like it.

“I’ve seen football played on strange pitches, but nothing, nothing beats this game for madness. Altitude up here is a serious issue, people really do get sick… this is a crazy thing to have witnessed on top of Kilimanjaro,” he laughed.

The summit of Kilimanjaro has half the level of oxygen than at sea level, doubling energy needed for the match.

Players are raising funds for charities including Cancer Research and conservation charity Tusk Trust, which works to stem rampant poaching of elephants and other animals.

Funds raised will also go towards building Rwanda’s first international cricket pitch. The game is growing rapidly in popularity in the central African nation there after being introduced by those who returned after fleeing genocide 20 years ago. 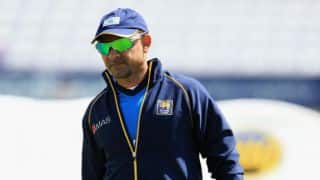