After the Twin Towers fell, international sport faced an unfamiliar world which sent Pakistan cricket into the wilderness but also kickstarted a rare good news story from embattled Afghanistan. 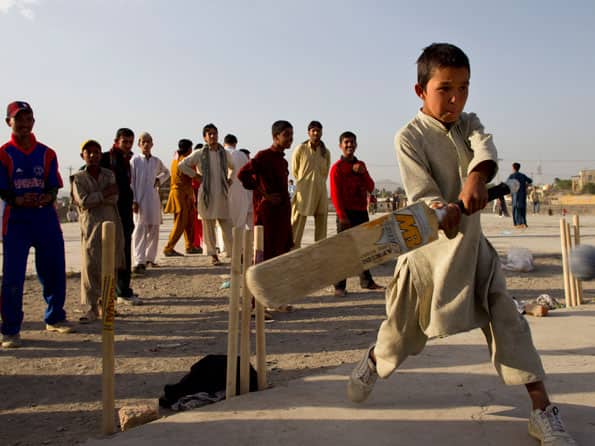 Children play cricket in the outskirts of Kabul. Cricket enthusiasm continues to grow as Out of the Ashes, a documentary film about the Afghanistan cricket team’s efforts to qualify for the sport’s World Cup, gains more attention and awards Getty Images

After the Twin Towers fell, international sport faced an unfamiliar world which sent Pakistan cricket into the wilderness but also kickstarted a rare good news story from embattled Afghanistan.

The fallout still haunts Pakistan with cricket, the country’s number one sporting obsession, in an almost constant cycle of turmoil.

With the country on the frontline of the US-led war on the Taliban and Al-Qaeda, two home series, against Australia and West Indies, were relocated in the immediate aftermath of the 9/11 attacks.

That has now become a regular storyline.

In 2009, the Sri Lankan team were attacked in Lahore, leaving eight people dead with Pakistan immediately stripped of its staging rights for the 2011 World Cup.

The incident was even described in some quarters as ‘cricket’s 9/11’ and Pakistan’s national team have since become nomads, playing ‘home’ series in England, New Zealand and the United Arab Emirates.

“Before that tragic incident, we held the premise that sporting teams had a low risk of being targeted. That incident changed our outlook on the safety and security landscape forever.”

Ironically, the only team brave enough to venture into Pakistan has been Afghanistan, who played three tour games earlier this year.

Afghanistan, whose players first learned the game growing up as refugees, narrowly missed qualification for the 2011 World Cup after a meteoric rise through the divisions.

But they did qualify for the 2010 World Twenty20 in the Caribbean and were runners-up at the Asian Games in China last year.

“Now the name of each player is known in every street and alleyway of Afghanistan. Cricket is so popular now that people feel proud naming their babies ‘Karim Sadiq’ or after some other Afghan player.”

Even US Secretary of State Hillary Clinton was impressed by the unlikely rise of the team.

“If we are searching for a model of how to meet tough international challenges with skill, dedication and teamwork, we need only look to the Afghan national cricket team,” she said.

But the legacy of 9/11 is never far from cricket in the strife-torn region.

When Afghanistan undertook their three-game tour in May, authorities had to pull a match scheduled to take place in Abbottabad, the town where US forces shot dead Osama bin Laden on May 2.

Tension between India and Pakistan has seen the best of Pakistan’s players unable to take part in the money-spinning Indian Premier League, a tournament which has made millionaires out of lesser talents.

For many in the game, the spot-fixing crisis which engulfed Pakistan last year, and led to bans for Test skipper Salman Butt and bowlers Mohammad Asif and Mohammad Aamer, was partly a product of the team’s isolation from such riches.

Against this background has been furious lobbying behind the scenes to convince international rivals that it is safe to tour the country.

But the ICC insist they will not be rushed into making any decisions they may live to regret.

“We all appreciate that acts of terrorism are beyond the control of sports administrators. Notwithstanding, cricket has always sought to continue playing the game without compromising the safety and security of players, officials, media and spectators, which is paramount,” added Lorgat.

“We now have risk management strategies in place and we are in the final stages of adopting a safety and security code that will assist in mitigating the risks in preparing safe and secure environments for international cricket to be played around the globe.”

Back in the United States, where cricket and its mind-boggling customs remain a mystery, the sport was used as a bridge between disaffected Asian youngsters and New York police in the aftermath of 9/11 when a grassroots league was formed.

One of the players, Fazar Showan, believed the idea could only improve relations which were tense at the best of times.

“It gives us Muslim kids a change to feel welcome with the police officers and not feel like they are going to come and try do some thing to us because they think we have a bomb or some thing, you know what I mean,” he said. (AFP)