Cricket South Africa has gathered intelligence that an international syndicate is attempting to corrupt domestic cricket.

Johannesburg:  Cricket South Africa (CSA) has sounded an alert to all its players and employees and is carrying out an investigation after gathering intelligence that an international syndicate is attempting to corrupt domestic cricket. An investigation is being led by CSA’s Anti-Corruption and Security Unit which is being assisted by the International Cricket Council (ICC) and could involve the South African Police Services (SAPS). CSA, as is the case with all the other international cricket boards, is a signatory to the “Keep Cricket Clean” vision of the ICC which envisages the provision of a co-ordinated and effective world-wide capability to protect all cricket played under its auspices. READ: Haroon Lorgat needs to explain allegations levelled against him, says Ali Bacher

“This is a timely reminder that we can never drop our guard in protecting the integrity of the game at every level,” said CSA Chief Executive, Haroon Lorgat. “We have an effective partnership with the South African Cricketers’ Association (SACA) to ensure that all our players, support staff and administrators are well educated about the nefarious activities of corrupt people and are aware of the consequences of falling victim to any shady approaches. Our attitude to corruption will always be one of zero tolerance and we are confident that we have the necessary structures in place to effectively deal with any corrupt activity,” he said. READ: South African Cricketers Association chief would be surprised if Proteas players were involved in fixing

Lorgat emphasised that CSA has the most up to date Anti-corruption Code which requires all players and support staff to report any approaches or any knowledge of corrupt activity. “We will relentlessly pursue under our Code and the law of the land any persons we believe to be involved in corrupting the game and, with assistance from the Police, we will also seek criminal prosecution,” said Lorgat. As is the standard practice with the ICC, neither CSA nor the ICC will make any further comment in respect of ongoing investigations. READ: South Africa Sports Minister to discuss about corruption with CSA 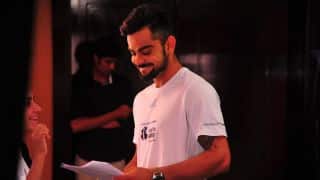