CSA s revenue for the 2016-17 season was Rand 696 million, which is significantly less when compared to the Rand 851 million turn over the board collected through revenue the previous year.

Cricket South Africa (CSA) are likely to go through a Rand 159 million loss for the 2016-17 season, the board revealed on Saturday. CSA s revenue for the specified span was Rand 696 million, which is significantly less when compared to the Rand 851 million turnover the board collected through revenue the previous year. However, Board President Chris Nenzani is confident of recovering the lost revenue with the upcoming string of home series. Nenzani cited the tours in the 2016-17 season to have failed to attract audience. READ: South Africa vs India Test not to take place on Boxing Day, New Year’s Day

“In commenting on the financial statements I would like to stress that CSA remains in a very healthy financial position. We have invested in major capital projects to grow the game of cricket and we are also in the process of building our own headquarters which will be a significant money-saving project in the long term, Nenzani told Espncricinfo on the matter. “As is well known our budgetary forecasts are based on a four-year rolling plan as the vast majority of our income comes from television revenue generated from incoming tours. As a result we anticipate a very strong financial year in 2018 as a result of the incoming tours from India and Australia,” he added. 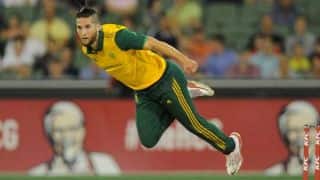