Henman said that Indian kids should be encouraged to play tennis from a young age.

New Delhi: Former World No.4 tennis player Briton Tim Henman said on Thursday that drainage of talented athletes to cricket at a young age is acting as an impediment in India’s way of producing top tennis talents.

Henman said cricket is the biggest sport in India because everyone loves the game and are interested in it. But tennis can also be attractive to Indians only when it is made accessible to the younger generation at an early stage.

“You have a lot of great athletes playing cricket and tennis’ challenge is to get more of the best athletes playing the sport. You have so many people and cricket is so popular here,” Henman, who is a coach of the HSBC Road to Wimbledon programme that is tasked to “improve Indian junior tennis”, said here.

Henman said that Indian kids should be encouraged to play tennis from a young age.

“Among the pool talent when these kids are young, we need to have more of them playing tennis. Andy Murray is also a great athlete in football and golf. Athletic ability is very important at a young age,” he said.

“We [Britain] have some better players coming through. We have great sportsmen and women and Britain won so many medals in the 2012 Olympic Games and that means we have great pool of athletes.”

Delving further into Indian tennis that has produced a lot of doubles stars but doesn’t have someone in the forefront of the singles game, Henman put it simply to the players lack of potential as singles players.

“They have to be better in all areas. One must have all abilities — tennis, physical and mental to sustain the high global standard. A player needs to be good in all areas to be successful.”

“Nowadays young people have a lot of mood distractions. In the modern times, there are a lot of opportunities and more sports to play. But what they watch on TV or what they play on computers distract them,” he pointed out.

“My advice will be to enjoy the game and have passion for it. They need to keep working hard, work on the physical improvement.”

“They also need to work on the mental side of things that will help them perform under pressure and above all one must remain focused,” he added.

The Englishman was hopeful that the HSBC Road to Wimbledon programme that has competitors from the four cities of New Delhi, Mumbai, Kolkata and Chandigarh will have the semi-finals here till April 11.

He hoped the programme will play a big role in inspiring young kids to join the sport.

“This is a huge opportunity of having tournaments for the young kids and be inspired by the history of Wimbledon. India also has its history and tradition of tennis and they will take inspiration from it and our role is to build on that and help grow the Indian junior tennis.” 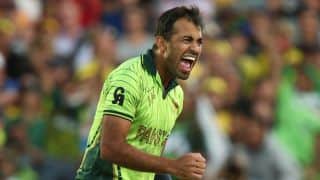