Emulating Virat Kohli is a mere dream for most young batsmen - but Grant Flower believes Babar Azam is well on the path to doing just that after his stylish century downed New Zealand.

Emulating Virat Kohli is a mere dream for most young batsmen – but Grant Flower believes Babar Azam is well on the path to doing just that after his stylish century downed New Zealand.

Facing an attack that had only conceded 250 once in the ICC Cricket World Cup 2019 to date, Babar showed few signs of nerves as his match-winning knock of 101 saw the Men in Green to a potentially vital victory.

A star performer during the recent bilateral series against England, the 24-year-old has continued his rich vein of form into the World Cup, with his pivotal innings at Edgbaston serving as his first century in the competition.

And with Babar already ranked as the No.1 T20 batsman in the world, batting coach Flower is confident his charge has what it takes to now kick on and join the pantheon of Pakistan greats – most notably because of the way he battled sickness to shine in Birmingham.

“He’s had flu over the last couple of days. Tuesday was the first time I’ve not seen him hit any balls the day before a match,” Flower revealed.

“Confidence-wise, this is definitely his best one (century).

“I’ve seen him get quite a few hundreds on pretty flat wickets, but this was a tough wicket – it was turning, Ferguson was bowling fast and there was a lot of pressure because of the context of the tournament.

“He is very special. I believe he is going to be one of the best that Pakistan have ever produced. He’s really hungry, is fit and still very young.

“I think he’ll have a really good career if he keeps his feet on the ground, which I think he will.

“He’s got Virat’s hunger. I think he could be at some point in the future.

“He’s definitely got that hunger, so if you practice as hard as he does, and you have his skills, I can’t see why he can’t get to the top.”

Trailing current incumbents England by three points heading into the Edgbaston clash, victory over the Black Caps leaves Pakistan well in the hunt for a semi-final berth.

With the gap now just a solitary point and Afghanistan up next, Flower is relishing the opportunity to take Eoin Morgan’s fancied side and put the cat well and truly among the pigeons.

He added: “It’s quite exciting, I think. For the first part of the tournament, it didn’t seem like it was going to be, but now there’s pressure on some of the top teams. It’s good.

“After today, it definitely puts us in a good position. It’s just our net run-rate, and obviously, those first few games didn’t help us.” 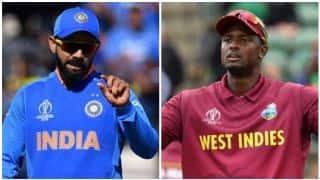 IND vs WI, Match 34, Cricket World Cup 2019, LIVE streaming: Teams, time in IST and where to watch on TV and online in India