Bangladesh, meanwhile, retained the same playing XI which took on against New Zealand.

Mashrafe Mortaza has won the toss and Bangladesh have elected to bowl against England against in match 12 of the ICC Cricket World Cup 2019 at the Sophia Gardens in Cardiff on Saturday.

Bangladesh have retained the same playing XI which took on against New Zealand. England, meanwhile, have made one change in the team as Liam Plunkett has replaced Moeen Ali in the playing XI.

Explaining his decision to bowl first, Mortaza said, “This pitch has been under cover for the last two days.”

“We liked to (make changes to the team) but we are sticking with the same team. Last match was disappointing but hopefully we will bounce back. We have to play at our best to beat this England team,” added the Bangladesh skipper. (Cricket World Cup 2019, ENG vs BAN: FOLLOW LIVE UPDATES)

Morgan, meanwhile, said that it was not too bad to a lose a toss in today’s game. “I don’t think this is a bad toss to lose considering the amount of grass that has come off this wicket,” said Morgan.

He then went on to explain why England picked Plunkett ahead Ali, who had taken three wickets against Pakistan in the previous game.

“Some grounds are bit shorter which doesn’t allow to bowl spin in tandem. Playing two spinners create a bit issue there hence we are playing an extra seamer,” said Morgan.

“We had a bad day against Pakistan. We played some good cricket against South Africa and hopefully we will play good cricket too,” concluded Morgan. ENG vs BAN, Match 12, Cricket World Cup 2019, LIVE streaming: Teams, time in IST and where to watch on TV and online in India 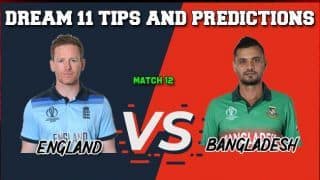