The forecast for Bristol on Friday is for heavy rain all through the day.

BRISTOL: For two teams coming off rejuvenating victories, match 11 of the ICC Cricket World Cup 2019 could end up a dampener.

The forecast for Bristol on Friday (June 7) is for heavy rain all through the day. At 10:30am local time, when this match between Pakistan and Sri Lanka is due to begin, the chance of rain is predicted for 80%. It is not a situation either team will fancy, for a washed out game could end up hurting them in the back end of the tournament.

Locals reckon the rain won’t let up, so we could all be in for a frustrating day.

Sri Lanka have never beaten Pakistan in a World Cup match, but Dimuth Karunaratne is confident that his team can become the first to do so. After losing to New Zealand by ten wickets, Sri Lanka overcame a scare against Afghanistan to find some momentum, which Karunaratne said instilled a greater sense of belief in the squad.

Up against the most unpredictable team in the sport, Sri Lanka are ready for a fightback. In this World Cup, Pakistan were bowled out for 105 by West Indies and then made 348 to beat England. What Pakistan team turns up in their third match remains to be seen.

What: Pakistan vs Sri Lanka

Weather: Rain is predicted in scattered bursts from 1am until the late afternoon.

Sri Lanka trained unbroken during the morning, under mostly grey skies, but rain did not interrupt their practice session. Each member of the team practiced, with Angelo Mathews and Kusal Mendis in particular getting more throw-downs. It was not surprising, given their poor scores in the World Cup.

Sri Lanka are not expected to make any changes to their last XI, with Karunaratne putting faith in the batsmen.

Pakistan’s practice session was briefly delayed by rain. Sarfaraz Ahmed, the skipper, was the first to turn up on the ground and ran a couple laps on his own. The team appeared in good spirits as it began a game of football and the mood remained upbeat during fielding, batting and bowling practice.

Head to head in 134 ODIs, West Indies have won 71 matches and Pakistan 60. Three matches have been tied.

Pakistan’s record in ODIs at the Country Ground is one win and one loss.

“I definitely do sense quite a bit of confidence, especially, like, in the meeting we had this morning. Since we have won, well it took off a lot of the pressure definitely, having gone through those string of defeats. Psychologically, that lifts a huge weight from their shoulders.” – Grant Flower, Pakistan batting coach

“We just need a win. It always give us the confidence if you get a win, any team, with any team, that is what we want. Finally, we got that. After that, we did really good things in that particular match, and also we have some parts to learn more, many things about the batting.” – Dimuth Karunaratne 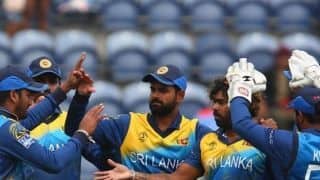