Pradeep had put his right hand up to protect his face from a straight shot hit back at him and injured himself in the process.

Sri Lanka suffered a major blow on Sunday when fast bowler Nuwan Pradeep was ruled out of their next ICC World Cup 2019 match against Bangladesh owing to a dislocated little finger on his bowling hand. The 32-year-old is likely to regain fitness in a week’s time, according to ICC.

Nuwan was given treatment at the hospital, while the doctors reset his dislocated finger and the cut on his finger was closed with stitches. He was also administered with antibiotics, Team Manager Asantha De Mel was quoted as saying in the media release.

Pradeep will not take part in Sri Lanka s game against Bangladesh on Tuesday as he will need a week s time to recover from the injury.

Sri Lanka have won just one from the three matches they have played so far. Pradeep picked 4 for 31 against Afghanistan and was named the man of the match in Sri Lanka’s 34-run win in Cardiff. Kasun Rajitha looks to be the likely replacement for Pradeep. 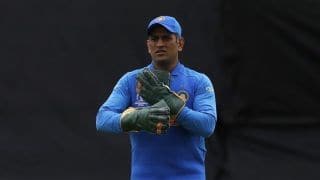