The pacer said that the secret of the team's success has been the ability of the players to rise up to the challenge and take responsibility.

From a bowler with a different action to being the spearhead of the Indian pace attack, Jasprit Bumrah has had a dream ride on the international stage and the bowler who became the second fastest Indian to take 100 ODI wickets says that criticism or praise — neither mean much to him.

“I don’t take praise or criticism seriously. The only focus for me is on my preparation, my execution and what I can do for the team. I always focus on all that and as far as the bowling unit is concerned we are very happy that everyone is among the wickets and everyone is contributing,” he pointed after India defeated Sri Lanka in their last group game in the ICC Cricket World Cup 2019 on Saturday.

Bumrah feels that the Indian bowlers are in a happy space as they have been picking wickets regularly and that augurs well for them as they prepare for the semi-final game against New Zealand on Tuesday.

“You see Hardik Pandya taking wickets, you see Mohammed Shami taking wickets and I’ve also taken wickets, so that’s the positive for us going forward. Everybody’s had a good run here. It’s been a good campaign for us, everybody has chipped in with wickets and with the bat,” he said.

While Shami was rested for the game against Sri Lanka on Saturday, he is expected to be back on Tuesday and Bumrah says that the headache of having more than one bowler fighting for a spot is a good sign.

“There’s a healthy competition. It’s a good headache to have when everyone’s performing and everyone’s in good nick and that’s something you love to have going into a crucial game like next week’s semi-final,” he explained.

The pacer said that the secret of the team’s success has been the ability of the players to rise up to the challenge and take responsibility.

“In most of our World Cup games, we’ve only had five bowlers that are bowling and it’s been going like this throughout. Everybody’s had a good run here. It’s been a good campaign for us, everybody’s chipped in with wickets, and with the bat also,” he said. 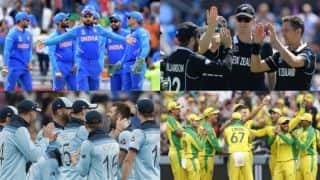