England have opted to go ahead with the same team. Mark Wood looks to have passed his fitness test.

Finally, it s going to be a scheduled start with rain staying away since morning. Eoin Morgan has won the toss and England have opted to field against West Indies in Match 19 of the ICC World Cup 2019 at The Rose Bowl in Southampton on Friday.

England have opted to go ahead with the same team. Mark Wood looks to have passed his fitness test.

Meanwhile, West Indies have made three changes to their team. Evin Lewis and Shannon Gabriel enter in what will be a full pace attack with Andre Russell also deemed fit to play.

Captain have their say at the toss:

Eoin Morgan: We are gonna have a bowl first. The wicket has been under covers for last 24 hours. There has been a lot of rain around and we feel there would be some moisture on it. Completely different challenge that we had against Bangladesh. The World Cup is about adapting to conditions. Tough challenge for us. We have got the same team.

Jason Holder: Oppurtunity for our guys to get some runs first. Probably would wanted to bowl first on a fresh wicket. There is a lot at stake. We guys have planned well for this game and we are up for it. It is a matter of adapting to particular individuals on that day. We have got three changes. Evin Lewis comes in, Russell comes back and Shannon Gabriel is making his first appearance. 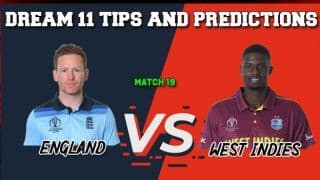