Cricket World Cup 2019: From Bumrah to Rabada and others, variety of yorkers and the bowlers who will exec

On flat pitches in England and Wales and shorter boundaries, bowlers with the skill-set are expected to use it frequently.

The yorker is a key death delivery in short-form cricket and at the World Cup, on flat pitches in England and Wales and shorter boundaries, bowlers with the skill-set are expected to use it frequently.

IANS takes a look at the variety of yorkers and the bowlers who are expected to unleash it at the World Cup:

The delivery which made Waqar Younis or Wasim Akram so lethal, a traditional yorker is one where the ball lands around the batsmen’s feet, bouncing on or near the popping crease in an attempt to break the stumps and dismiss the batsman.

Rated as one of the best bowlers of his generation, the South African tearaway quick’s expertise in bowling the yorker was in full display when he floored Andre Russell’s middle stump in the Super Over to help Delhi Capitals beat Kolkata Knight Riders in the Indian Premier League.

One the biggest hitters in the game, Russell had no answers to Rabada’s class as the 23-year old used the delivery to good affect to also contain the batsman.

He was so good, the England selector could not keep him out of the final 15 going to the World Cup. Central to Archer’s fast rise, especially in T20 cricket, has been his ability to bowl a perfect yorker.

Before the start of the Pakistan series, Archer bowled 61 yorkers in his T20 career; leaking a total of 38 runs, while snaring nine wickets at an average of just 4.22. In the World Cup, hosts and contenders England will be hoping Archer can reap the same dividends with his stock delivery.

A yorker with inswing so that the ball moves from off to leg through the air but pitches in the block hole.

At the Whitgift School over the weekend, a scratch match which saw Australian players divide themselves in two teams, brought to the fore Mitchell Starc’s deadly inswinging yorker which got rid of skipper Aaron Finch.

Few can keep out Starc’s lethal stock ball, which was in full tilt during the 2015 World Cup where he took 22 wickets at an average of 10.

Although the 29-year old has been in and out of the Australian team due to injury, managing only seven limited-overs games since the beginning of 2018, the World Cup will provide the stage for him to come good with his inswinging yorkers.

Kemar Roach, who is expected to spearhead the West Indies pace attack, has the ability to swing the ball bothways and his accuracy with yorkers has fetched him lot of wickets.

It is a type of slower yorker, executed by positioning the ball on the knuckles of the index and middle finger instead of the palm.

He has time and again outfoxed batsmen with his knuckle ball and with Bhuvneshwar also being a death-over specialist, the swing king has developed his knuckle yorker aimed to keeping batsmen quiet during the dying phases of the innings, and also snaring a wicket or two when he is expecting pace on the ball. (ALSO READ: Bhuvneshwar Kumar backs India’s bowling attack to make impact on any surface)

Bhuvneshwar, a great student of the game who has excellent control of his wrist, hasn’t been in great form for some time and would look to turn things around at the World Cup.

Tom Curran has been working on his slower ball variations, according to him ahead of the World Cup. “I’m practising all the time, trying these new ones.

There’s obviously the knuckle ball, and there’s other slower balls that are coming out,” he had said during England’s ODI series against New Zealand. Curran has a deceptive Knuckle yorker too and in the death overs, he has been quite effective for the Three Lions.

The same arm action, but the ball reaches the batsman way after he has completed his shot. The slowness in the air makes this ball almost unplayable if executed perfectly.

Sachin Tendulkar rated Jasprit Bumrah as the best in the world at the moment after the pacer helped Mumbai Indians win their record fourth IPL title.

No batsman in the world has it easy against Bumrah who besides bowling quick, makes the ball curve in the air and manipulates the seam skilfully. This makes him bowl a lot of slower ones too, with the slower yorker coming to good effect in the death overs. (ALSO READ: Thomson praises “unorthodox” and “different” Bumrah)

A veteran sling-arm death bowling specialist, Lasith Malinga has mastered the art of yorkers and despite being in the twilight of his career, showed in the IPL he has still got the fire in the belly to bowl those toe-crushing yorkers to get them across the line at crucial junctures. The slower yorker is an addition to his array of deceptive deliveries and along with wide ones, these deliveries can be handy during the last few overs when the batsman is looking to go big.

Not just fast bowlers, even spinners use yorkers to great effect these days.

Adam Zampa’s fullish delivery, a spinner’s yorker so to say, castled MS Dhoni in the third ODI in Ranchi in March. The delivery surprised the former India captain and also underlined tweakers using the yorker to good effect when the need be, in their bid to add variety in the face of batters’ onsalught. Zampa will look to use the same ball and cause havoc in England and Wales as Australia aim to defend their crown. He also bamboozled Virat Kohli in the same series with one that dipped after pitching and ended up yorking the India captain.

The teenage Afghanistan off-spinner is known for his carrom ball, but in recent times the 18-year old has used the yorker to see off batsmen too and also contain them in the death overs. The drift and the dip makes it almost unplayable when it pitches in the right area. 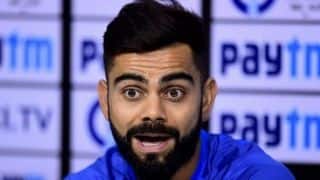