Cricket World Cup 2019: India may deliberately lose against SL, Bangladesh to keep Pakistan out of semifin

Basit, who played 19 Tests and 50 ODIs between 1993 and 1996, also said India intentionally played poorly against Afghanistan.

Former batsman Basit Ali has made an outrageous claim that India may deliberately lose their upcoming World Cup matches against Bangladesh and Sri Lanka to keep Pakistan out of the semifinals.

Basit, who played 19 Tests and 50 ODIs between 1993 and 1996, also said India intentionally played poorly against Afghanistan.

“India will never want Pakistan to reach the semi-finals. They have matches remaining against Bangladesh and Sri Lanka. Everybody saw how India won against Afghanistan,” Basit said during a talk show in ‘ARY News’.

Unbeaten India are yet to clinch a semifinal spot though they have put one foot on a last-four berth with 11 points from six matches. They play England on Sunday before taking on Bangladesh and Sri Lanka in their last two matches.

Asked again if he thought India may deliberately lose their matches to keep Pakistan out of semi-finals, he said, “They (India) will play in such a way that nobody will know what has happened. What happened against Afghanistan?”

“What did Australia do against India? What did David Warner do?” he retorted when asked if it was desirable to see win or loss in that fashion.

He also said that New Zealand deliberately lost to Pakistan (in league stage) in the 1992 World Cup to be able to play the semifinals at home. Pakistan went on to beat New Zealand for the second time in the tournament with a four-wicket win in the semifinals in Auckland before defeating England in the final to win the title.

“What happened in 1992? New Zealand deliberately lost to Pakistan (in the league stage). If you ask Imran bhai (then captain Imran Khan), he will also say this. They (New Zealand) lost against Pakistan so that they can play at home in the semifinals.” 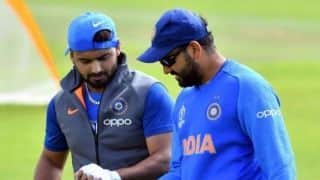