A target of 161 was never likely to test England, with Roy proving as much in a 46-ball innings that included 11 fours and four sixes.

Jason Roy sealed an England thrashing of Afghanistan as the tournament hosts cruised to victory in their final match before the ICC World Cup 2019. Roy made 89 not out on his Surrey home ground on Monday as England hammered outsiders Afghanistan by nine wickets with nearly 200 balls to spare.

England, two days after losing their previous practice match to world champions Australia, returned to winning ways in convincing fashion ahead of their tournament opener against South Africa at the Oval on Thursday.

A target of 161 was never likely to test England, with Roy proving as much in a 46-ball innings that included 11 fours and four sixes.

Before play started, England were boosted by the news that fast bowler Mark Wood had been passed fit to face South Africa after a foot injury and that one-day captain Eoin Morgan was back in the team following a fractured finger.

Morgan did not field, however, and was not required to bat with the only wicket Afghanistan took coming when Jonny Bairstow was stumped by Rahmat Shah off Mohammad Nabi for 39. Roy ended the match in the 18th over of England’s reply with a six over midwicket.

Earlier, Jofra Archer and Joe Root took three wickets apiece as Afghanistan slumped to 160 all out. Fast bowler Archer, in what is tournament hosts England’s last match before they open the World Cup against South Africa at the Oval on Thursday, struck twice with the new ball before ending some late resistance from Mohammad Nabi.

Afghanistan were in danger of being dismissed for under 100 before Nabi, with 44, helped the last two wickets add 68 runs.

Archer dismissed Hazratullah Zazai and Rahmat Shah in a brisk new-ball spell. Meanwhile opener Noor Ali saw scrapped his way to 30 before he played on to Ben Stokes.

Hashmatullah could not get going and that prompted Asghar Afghan to attack the occasional off-spin of Test captain Root. But, having missed out on a first-ball full toss, Asghar tried to drive Root over the top but found Jason Roy in the deep instead.

Afghanistan lost their next four wickets in a mere seven deliveries, Hashmatullah and Najibullah Zadran carelessly run out, Gulbadin Naib holing out to Moeen Ali and Rashid Khan steering Root to slip for a golden duck.

Nabi’s defiant hitting, which included three sixes, at least ensured England would have some sort of target to chase. He was last man out when a thick edge off Archer carried to Jonny Bairstow on the boundary. 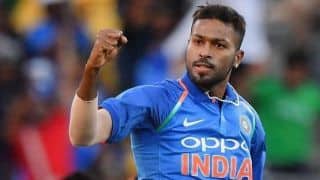