Coulter-Nile, who smashed a 60-ball 92, registered the highest score by a No. 8 batsman in World Cup history.

Nathan Coulter-Nile inspired a remarkable Australian fightback against West Indies in Match 10 of the ICC World Cup 2019 at Trent Bridge at Nottingham on Thursday. Coulter-Nile, who smashed a 60-ball 92, registered the highest score by a No. 8 batsman in World Cup history. He eclipsed Zimbabwe s Heath Streak s unbeaten 72 in World Cup 2003. Coulter-Nile, who smashed eight boundaries and four sixes, also recorded his maiden ODI half-century in his 29th ODI. His previous highest was 34 last year.

No. I did not think I would get that much. I remember Steve Smith being on 81 and me not hanging around in a practice game, so I thought I would stick around a little bit, Coulter-Nile, who won the Man of the Match award after Australia pulled off a sensational 15-run win, said at the post-match presentation ceremony.

Coulter-Nile fell three runs short to record the all-time ODI score by a No. 8 batsman achieved by England s Chris Woakes (95 not out).

Played a pull shot second ball and it went up, luck went my way, couple dropped safely and inside edged a few. That’s the way cricket goes, he said.

Talking about the wicket, he said: I felt it (the surface) quite hard. The wicket was a bit up and down, but I settled in and got used to it. They were on the way before Starcy (Mitchell Starc) picked 2-3, good move by Aaron Finch to bring him on then. He is a fantastic bowler and credit goes to him. 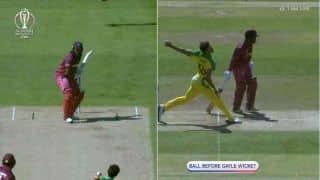