LONDON: Shikhar Dhawan continued his love affair with English surfaces as he overcame a jittery start to fashion an entertaining hundred – his 17th in ODIs – to lay the base for India‘s 352/5 in 50 overs against Australia in match 14 of the ICC Cricket World Cup 2019 at Kennington Oval on Sunday.

Aided by fifties from Rohit Sharma and Virat Kohli and a rapid 27-ball 48 from Hardik Pandya, India made terrific use of getting to bat first on a run-filled strip to put up their fourth-best score in a World Cup match. Australia now have to seal their highest ever World Cup chase, against an attack led by the best bowler in ODIs.

As in India’s opening match against South Africa in Southampton, Dhawan was made to look very fidgety early in the match against pace. There was nothing much in the surface, but Dhawan’s early troubles against Mitchell Starc and Pat Cummins didn’t indicate that he was in line for a dominating century. And yet, having seen out that initial testing period, he flourished and raised three figures off 95 deliveries in front of a full house at Kennington Oval, one distinctly blue in wholesome support for India.

Starc and Pat Cummins didn’t find any noticeable movement, so instead used accurate lines and a few short deliveries to keep Rohit and Dhawan quiet. Dhawan, in particular, was hurried by Starc’s pace and bounce. Constantly looking to put the left-arm quick off his lines, he awkwardly tried to whip the ball to the legside off the stumps and once was denied a four by a diving Glenn Maxwell at point when he chopped into the ground. In the next over, Cummins zipped the ball past his Dhawan’s outer edge when the batsman tried to manufacture a nothing shot across the line.

Starc provided an opening in his first over when Rohit was on 2, an aerial clip off the pads put down by at square leg by a leaping Nathan Coulter-Nile. A tough chance, but one that needed to be taken. Rohit was also hurried into a hook shot by Starc, the ball instead hitting him on the body.

India got their first boundary in the fourth over, when Dhawan finally connected a good-looking shot. Seeing a bit of room from Cummins, he pierced the gap at cover with a firm push. Immediately, a large section of Indian fans started to chant, on loop: “Jeetega bhai jeetega, India jeetega!“. With that shot, one of the slips dropped out.

Dhawan wore a skidding delivery on the shoulder, and then needed treatment from the team physio. He increased in confidence and fluency once Starc and Cummins made way for Coulter-Nile, Marcus Stoinis, Adam Zampa and Glenn Maxwell. Zampa was cut for four, Coulter-Nile hooked past fine leg and Stoinis ramped over Alex Carey. Dhawan’s half-century was raised off 53 balls, and the 100-run stand with Rohit came up in 19 overs.

Rohit threatened damage with six off Coulter-Nile followed by consecutive fours off Stoinis, but fell against the run of play. On 57, he nicked Coulter-Nile to Carey having added 127 in 22.3 overs with Dhawan.

(ALSO READ: For these Indian fans from around the globe, there’s nothing like cricket)

A thick edge off Cummins over Carey took Dhawan into the nineties, and his century came up off 95 balls with a scampered single. Dhawan had to wait until a run-out appeal was confirmed, and then out came his trademark eagle-armed celebration of three figures. Three more boundaries punctuated his innings, which ended when he attempted to clear midwicket off Starc but found the man stationed just inside the boundary.

Kohli was kept quite by Cummins initially, but true to form he opened up to thrill the fans. Stoinis was short-arm-jabbed past midwicket, Coulter-Nile hammered between mid-on and midwicket. His fifty came up off 55 balls.

On 0, looking to run Coulter-Nile down to third man, Pandya edged to Carey who dropped the catch to his right. It proved a costly drop, for Pandya tucked into the bowling with glee. Maxwell and Zampa were slogged for six, Coulter-Nile forced to evade a hammered drive for four and Cummins lofted and upper-cut with ease in a partnership of 81 in 8.5 overs.

MS Dhoni thrilled the fans with a cameo 27 from 14, which helped India score 51 off the last four overs, and Kohli was out off the penultimate ball of the innings when he slapped Stoinis to deep cover. 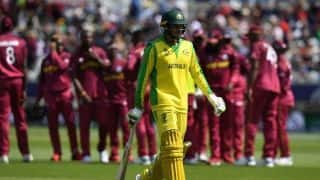