Quinton de Kock scored 68 for South Africa as they coasted home in the 28th over.

South Africa kept alive their slim hopes of reaching the ICC World Cup 2019 semi-finals by thumping a poor Afghanistan side by nine wickets at the Sophia Gardens in Cardiff on Saturday to record their first win of the tournament.

Afghanistan, who lost the toss in Cardiff, were dismissed for just 125 in 34.1 overs. Quinton de Kock scored 68 for South Africa as they coasted home in the 28th over.

Earlier, Afghanistan succumbed to a batting collapse of sorts. From 69/2 to 125 all out, it came crashing down for Afganistan specially after the second rain break. Imran Tahir led from the front pocketing four wickets, while Chris Morris added another three as South Africa bundled out Afghanistan for 125 in 34.1 overs.

Tahir ended with figures of four for 29 in his seven overs, while Morris returned with exquisite numbers of three for 13 in his 6.1 overs. Rashid Khan was the lone member from Afghanistan, who could offer some resistance, scoring a 25-ball 35 cameo.

After the first rain break, Afghanistan were relatively well placed at 69 for 2, but 32 balls into the resumption, they had lost 5 for 8 and the innings was in tatters.

Faf du Plessis s side have endured a torrid campaign so far, losing their first three matches and then picking up one point from a rain-ruined match against the West Indies.

Only Afghanistan, with three defeats in three games, are below them in the 10-team table.

Unfancied Afghanistan made a bright start, reaching 33 without loss when rain temporarily stopped play in the sixth over, with Hazratullah Zazai and Noor Ali Zadran both unbeaten on 16.

After the resumption, Zazai was the first to go, caught by Rassie van der Dussen for 22 off the bowling of paceman Kagiso Rabada before Chris Morris trapped Rahmat Shah in front when he was on six.

South Africa, who were unchanged, won the toss and chose to bowl. Afghanistan made one change, bringing in former captain Asghar Afghan in place of Najibullah Zadran. 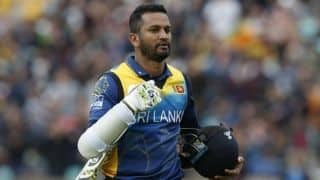 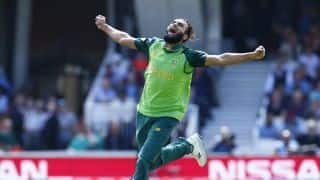