Former Test umpire Daryl Harper described India's reservation to cricket's electronic eye as "ludicrous" and "frustrating" and said the BCCI is holding the world to ransom on UDRS in the presence of a weak ICC. 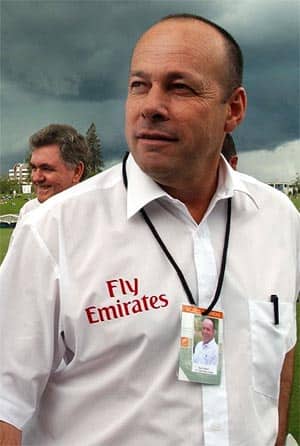 Former Test umpire Daryl Harper described India’s reservation to cricket’s electronic eye as “ludicrous” and “frustrating” and said the BCCI is holding the world to ransom on UDRS in the presence of a weak ICC.

“If you get one wrong in this format it can’t be rectified. It is a ludicrous situation which makes every situation magnified. It is very frustrating,” Harper was quoted as saying in the Herald Sun.

“The technology is not 100 per cent accurate but it never will be. It is not perfect but it is a step in the right direction,” he added.

The Indian Cricket Board has refused to use the Decision Referral System with skipper Mahendra Singh Dhoni saying that the technology isn’t fool proof.

India’s refusal to use UDRS led to the controversial dismissal of Michael Hussey (0) and debutant Ed Cowan (68) by the on-field umpires in the opening Test even though TV replays suggested that they did not edge the ball.

India also could have been benefitted by the DRS as they could have got Ricky Ponting out early in his second innings.

Michael Hussey too was lbw twice and caught down the leg side once, which could have changed the result of the game.

Earlier this year, ICC had ruled that the DRS would be implemented for all Test matches but later changed its stance and made its use subject to bilateral agreements between the participating boards.

“The ICC is doing no controlling and the rest of the world is being held to ransom,” said Harper, who retired from the ICC elite panel after 95 Tests and 175 ODIs in June.

“The man on the street is asking how the ICC can allow this to continue.”

Harper felt India’s refusal to use cricket’s electronic eye is a calculated move to preserve a successful approach to over-appealing that is neutralised by technology.

Recalling the first Test between West Indies and India at Kingston in June, Harper said: “In the pre tour meeting with the West Indies manager, coach and captain they were very concerned that the excessive appealing by the Indians was influencing the umpires and that cricket wasn’t being played in the best spirit of cricket.

“I told them we would be vigilant and what happened in the first Test? One of the fieldsmen charged at least 13 metres down to my colleague Ian Gould demanding a bad pad catch be given.

“I reminded MS Dhoni that he was responsible for his team’s behaviour but he didn’t want to acknowledge that.” (PTI)

Indian batting in the first Test was substandard: Dean Jones