Bulawayo-born Bland had appeared in a total of 21 Test matches for South Africa against New Zealand, Australia and England.

Johannesburg [South Africa]: Cricket South Africa (CSA) has condoled the death of former all-rounder Colin Bland, who recently passed away in London. Referred as `one of the greatest fielders` the game has ever seen, Bland passed away at his home in London after fighting a long battle against colon cancer.

Meanwhile, former South African cricketer Jonty Rhodes also took to his Twitter account and expressed his grief on the demise of Bland by describing him as the ‘father of fielding’, Sport24 reported.

“Sad to hear about the passing of the #fatheroffielding Colin Bland this past weekend. RIP and condolences to his family #fieldingrevolution,”he wrote.

“I was told he was something special in the field,” Gibbs said.

Bulawayo-born Bland had appeared in a total of 21 Test matches for South Africa against New Zealand, Australia and England between a period of 1961 and 1966.

However, his career was cut short after he sustained a bad knee injury while he was trying to save a boundary during the opening Test of the home series against Australia in 1966. 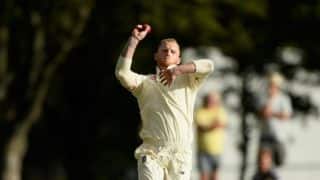