Cricket South Africa (CSA) has lauded top-order batsman Hashim Amla and bowling all-rounder Vernon Philander for their superlative effort, which saw the Proteas dethrone England from the top of the ICC Test Rankings. 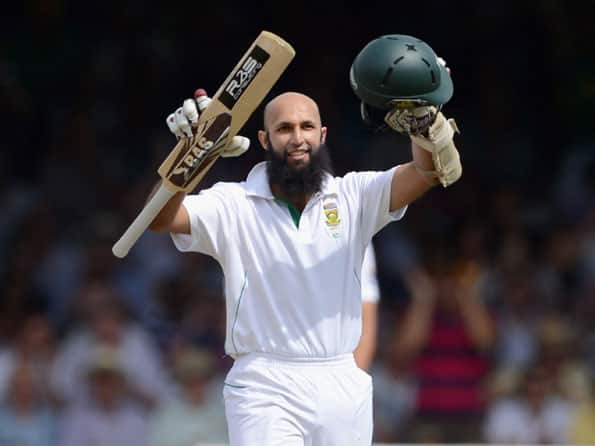 Hashim Amla scored 482 runs in five innings at an average of 120.5 against England in the recently concluded Test series Getty Images

Cricket South Africa (CSA) has lauded top-order batsman Hashim Amla and bowling all-rounder Vernon Philander for their superlative effort, which saw the Proteas dethrone England from the top of the ICC Test Rankings.

Graeme Smith-led South Africa won the final Test match against England by 51 runs at the Lords last night to clinch the three-match series 2-0 to not only retain the prestigious Basil D’Oliveira Trophy but also claimed the No.1 Test spot.

The series win, second on the trot for the visitors in England, saw South Africa overcome the English supremacy with a total of 120 ranking points.

England with 117 points have been pushed to the second spot, while Australia are at No. 3 with 116 points.

“The match was a personal triumph for virtually every member of the Proteas’ starting XI but Hashim Amla had to stand out for his century as did Vernon Philander who made 96 invaluable runs as a No. 8 batsman over the two innings and returned with the figures of 5/30,” CSA said in a statement.

Amla scored a 121 runs in South Africa’s second innings to set up a difficult target of 346 for England before Philander picked his seventh five-wicket haul in less than a year of Test cricket to see his side get to the top.

In the pursuit the right-arm medium pacer also etched his name on the famous Honour’s Board.

Philander has taken 39 wickets in the current calendar year, which is just one less than the leader, Stuart Broad of England.

The Proteas, however, would have a difficult task at hands, defending their No 1 position when they travel to Australia in November for a three-match Test series, followed by a home series against New Zealand and Pakistan.

“The entire squad, including all the players and team management, deserve every accolade they will undoubtedly receive,” CSA acting CEO, Jacques Faul, said after the match.

Faul in particular lauded head coach Gary Kirsten for his calm and serene impact on the team.

“What has been particularly impressive has been the way they have performed when the pressure has been at its most extreme and this is a tribute to head coach Gary Kirsten and his assistants for the coolness under pressure they have brought to the squad.

“That coolness was a feature of Gary’s own career and he has worked wonders in his first year in charge,” he added.

The memorable final Test at the Lords also marked a historic outing for the skipper Smith, who turned out to lead SA for a world record 94th time. (PTI)